Shane Lowry and Paul Dunne cling on at Wentworth 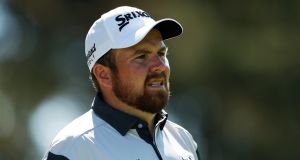 A one-time tour professional once described the West Course as akin to living in a haunted house, in that you never knew what lay around the next corner. Trick, or treat. Even the tweaking to the set-up hasn’t changed that particular phenomenon; and, for both Shane Lowry and Paul Dunne, there was a need to demonstrate fortitude in the second round of the BMW PGA Championship in order to maintain realistic quests for the title.

On a beautifully sunny day, but one with strong gusts of wind that would have tested the patience of a saint, Italian Francesco Molinari, Belgian Thomas Pieters and Scotland’s Scott Jamieson claimed a share of the midway lead - on seven-under-par 137 - but all were only too aware that the second half of the journey will be the more difficult part, with the course firming up and the threat of tougher weather conditions.

Certainly, the two Irishmen will hope their bad day, so to speak, has been dispatched and that they can yet impact at the business end of proceedings over the weekend.

Lowry kept his cool even when frustrated by a number of lip outs, while, in Dunne’s case, it was a matter of grinding out a score after a restless, disrupted night’s sleep.

In the end, both were relieved to walk away from the 18th green with some momentum to take forward: Lowry birdied the last for a 74 for 142; Dunne made a par save from a greenside bunker for a 75 for 146.

As Dunne observed, “The first order of business is to make the cut. I am quite competitive by nature, I don’t want to see a weekend slip past and watch everyone play while I am sitting on the range.” And most definitely not at a tournament like the BMW PGA, the first leg of the Rolex Series with wheelbarrows of greenbacks and precious Race to Dubai points.

Indeed, Dunne’s performance - recovering from a hat-trick of bogeys around the turn, from the eighth to the 10th that threatened to derail him - was all the more impressive for the fact he was unwell. “I woke up about three o’clock and I was freezing, went back to sleep and woke up at four and it was like I’d wet the bed, the sheets were soaked,” said the Greystones golfer, who combated both physical sickness and what he called a “suspect” swing to ensure his progress.

“It’s great to be in (for the weekend) and hopefully I can build on it now. I’m just not feeling that comfortable with any parts of my game. I feel like I have to take ages over a putt to get settled to where I feel like I start the ball on line. If I hit it fast, it just feel like I block every putt. It is just something that needs more competitive practice. My swing’s felt a little suspect over the last week or so. I felt like I was playing great two or three weeks ago and I have slipped into bad habits,” said Dunne, who hoped some work on the range would enable him to resolve the issues.

For Lowry, there was some ingenuity to behold. It came on the Par 5 12th hole where the Offalyman’s drive finished on the root of a tree. Performing a feat of escapology, Lowry managed to advance the ball through the V-shape of two trees and then hit a seven-iron approach from 220 yards to eight feet for “a huge birdie.”

Lowry had a number of putts which lipped out, others that grazed the hole. “I’d a couple of putts where I was absolutely robbed, I still don’t know how they didn’t go in,” he claimed.

Yet, the persistent questioning of his putting was something that irritated the player post-round. As Lowry put it afterwards, “I’m not struggling on the greens. I’m sick of people talking about it and I’m sick of listening to it. I’ve worked my nuts off all year and I finally turned around the last few weeks and I’m still listening to people talk about it. I’m happy where my game is and I’m looking forward to the summer.

“I’m really looking forward to the weekend here and great tournament next week, Memorial and I have a couple of majors coming up. I’ve got a very exciting summer and I really feel like my game is where I want it to be. Albeit my results haven’t been good but my game is definitely where I want it to be,” said Lowry who, five shots adrift of the midway leaders, might have a gilt-edged opportunity to prove his point to any doubters as he chases down Messrs Molinari, Pieters and Jamieson.

Man City slip up at home to Cyrstal Palace 17:29
Shane Long ends drought but Southampton lose out 17:18
Walsh leads from the front for Galway 17:03
Longford claim first O’Byrne Cup since 2000 16:43
Leinster qualify as top seeds with Benetton win 15:50
Here is your handy guide to sport on television this week