Paul Casey in contention as Graeme McDowell slips back in Texas 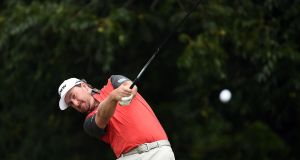 Graeme McDowell drives from the sixth tee during the third round of the Dean and DeLuca Invitational at Colonial Country Club in Fort Worth, Texas. Photograph: Stacy Revere/Getty Images

Paul Casey holed a 23-foot putt on the 18th to leave himself within two shots of the lead at the Dean and DeLuca Invitational in Texas as Graeme McDowell’s challenge faded in the third round.

England’s Casey, who is without a win on the PGA Tour since 2009, goes into the final day behind only leader Webb Simpson after recording a two-under-par 68 in the third round at Fort Worth.

Casey is joined on seven under par by New Zealand’s Danny Lee, while American duo Stewart Cink and Kevin Kisner are both one shot further back.

Defending champion Jordan Spieth is five shots off the lead on four under, as is Masters champion Sergio Garcia, who had three bogeys in a one-over 71.

McDowell carded five bogeys and three birdies in a two-over 72 that left him seven shots off the lead in a tie for 15th position on two under.

Casey started the third round one shot behind four co-leaders.

He reached the turn in 36 following a dropped shot on the eighth but began the back nine with successive birdies.

Another bogey on the 12th threatened to stall his progress but he responded by sending his tee shot to within four feet at the par-three 13th for a birdie, before his superb putt on the last left him right in contention for a win on Sunday.

Simpson, the 2012 US Open champion, dropped his only shot of the day on the eighth but birdies on the first, second, 10th and 11th saw him sign for a three-under 67.

Lee, who shot the week’s lowest score on Friday, kept in touch with a 69. He had three birdies and three bogeys in his first eight holes, before recording nine successive pars and then draining a 16-foot putt on the last for birdie.