Graeme McDowell firmly in the hunt in Texas

A second round 70 leaves him two shots off halfway lead of Simpson, Kisner and Lee 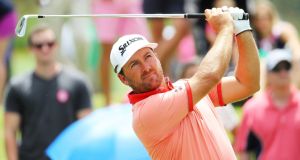 Masters champion Sergio Garcia and England’s Paul Casey moved to within one shot of the leaders at the Dean & Deluca Invitational.

The pair each shot a four-under-par 66 to surge up the leaderboard in the second round in Texas.

Garcia had six birdies while Casey dropped just one shot as the duo ended day two on five under alongside Spaniard Jon Rahm and American Sean O’Hair.

The quartet trail major winner Web Simpson, his fellow Americans Scott Piercy and Kevin Kisner, and New Zealand’s Danny Lee, whose 64 was the lowest round of the week so far.

Meanwhile Graeme McDowell is two shots off the lead after a superb recovery on the back nine saw him follow up his first-round 66 with a level-par 70.

McDowell was three over at the turn, having three-putted for a double bogey at the third and then dropped further shots at the sixth and the eighth.

But a stunning approach on the 10th gave him a short putt for birdie, and further gains followed on the 11th and 14th.

Elsewhere Simpson birdied the last three holes to take a share of the clubhouse lead as he searches for his first PGA Tour victory since 2013.

Jordan Spieth will return at the weekend after missing the cut in his last two tournaments. The defending champion recovered from dropping shots on three of his first five holes to shoot a 68, leaving him four shots off the lead.

Garcia and Casey started the day four shots back and each birdied their first two holes.

The Spaniard dropped a shot on the fourth but picked up back-to-back birdies on the sixth and seventh. A bogey on the 10th was followed by a 12-foot putt for birdie on the next hole and another gain on the par-three 16th left him four under for the day.

Casey, who started on the back nine, dropped his only shot on the 12th but bounced back with a gain on the 13th. He then birdied the first and, after saving par with a 25-foot putt on the fifth, gained another shot on the sixth.