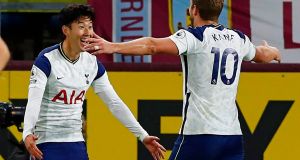 Ireland head to Paris this Saturday knowing a bonus-point victory would see them crowned Six Nations title winners, but both history and form suggest Andy Farrell’s side will have their work cut out if they are to secure the title at the Stade de France. Ireland have beaten France away from home just three times in their last 24 attempts and have never scored four tries when playing Les Bleus on the road. And as Gerry Thornley writes in his column this morning, their chances of doing so this weekend look slim against a vibrant French side inspired by the excellent scrumhalf Antoine Dupont. He writes: “It’s as if, at times, Dupont seems to be thinking a second or two ahead of everyone else on the pitch. He also seems to be made of rubber, the way he bounces off both opponents and the ground, and his footwork is outrageous.” Meanwhile, England coach Eddie Jones has said he can’t guarantee his players will follow Covid-19 protocols ahead of Saturday’s trip to Rome: “I can’t sit here and tell you 100 per cent we’re going to be perfect. But our intention is to be.”

Farrell will name his side for Saturday’s match on Wednesday, with the fitness of Jamison Gibson-Park, Keith Earls and Rónan Kelleher currently in the balance. One player who is likely to return to the starting XV is Robbie Henshaw, and the Leinster centre is looking forward to lining up alongside his former Connacht teammate Bundee Aki in midfield. Elsewhere, Munster earned a bonus point with a 38-27 win over Cardiff Blues at Thomond Park last night.