Ronan Finn on why Shamrock Rovers are worthy champions 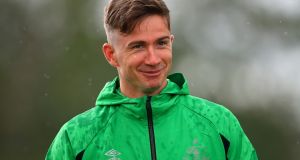 It is 95 years since Shamrock Rovers beat Bohemians into second place in a title race lasting just 18 games. That, though, is pretty much where the similarities between the two seasons are likely to end.

This time around, Rovers captain Ronan Finn sat at home, watching online as his side’s arch rivals lost at home in an empty stadium and so guaranteed Stephen Bradley’s men top spot. There was some celebratory texting among the squad but meeting up in town to toast the success wasn’t an option.

“It was a bit different to other years,” acknowledges Finn, “but that’s just the way it is right now.”

Not much went to schedule in terms of the wider campaign but the 32 year-old insists that the club’s 18th league title is the culmination of a plan set out by Bradley when the then recently appointed manager was bringing him back to Tallaght four years ago.

“This was the goal,” he says. “At that time Dundalk were so strong it obviously wasn’t going to happen overnight. But the manager remained sure of his planning and sure of what he wanted to achieve. He never strayed in the way that he wanted football to be played; he always maintained that if we were going to get to the top, we were going to achieve it this way.

“He’s been unbelievable; his knowledge of the game is second to none. He deserves all of the success. His contribution has been crucial for the football club and hopefully there’s a lot more to come.

“The club will want to keep on progressing now and Europe’s a huge part of that, both in terms of credibility and finance. There’ll be Champions League next summer and maybe the Europa League and the Europa League 2, the new competition that was on the horizon. That’s where the real windfall comes from when you win the league. That gives you a chance to build. European football when it comes around will be very important.”

Clinching this season’s title so early, he says however, gives him and the rest of the current squad that little bit extra time to savour what they have achieved, something that nobody can devalue, however much they might want to try.

“The main thing for us is that the club is back being the number one club in Ireland,” he says. “In football, or in any walk of life, you’ll always have people on the other side of the fence who try to take you down a peg or two.

“But it’s not like we played more games than anybody else. We all knew what was at stake, we all knew the league was going to be halved and when we did the restart I think there was only three points between us and Bohs, they were right there. But we started to pick up points very quickly and all of a sudden we were into the business end of it having opened a bit of a gap.

“The games against Bohemians were tough, edgy, but the fact that we won both of them by a goal is a testament to the quality of the group. Based on the 14 games, we’ve won it on merit. Some people might say there was only half a season but I think the counter argument is that with only half a season we won it with four games to play.”

It was one of the games against Dundalk that stands out as his highlight of the season with Finn suggesting that the 3-2 defeat of the defending champions, his former club, way back in February, is actually a career highlight too. Few who were there that night would doubt it.

“I’d say it was a great spectacle. Maybe if you’re not an avid League of Ireland fan but you tune in for a game like that, played in a packed stadium - I think that was one of the biggest crowds I have played in front of in a league game - and the high level of technical football that was on show that night . . . some of the goals are fantastic.

“There was an unbelievable energy in the crowd, a great atmosphere. Everyone knew the magnitude of the game. It was the two top clubs in the country going at each other, trying to play football.

“It was a rollercoaster game, 1-0 up, 2-1 down but we came out on top and that gave us a belief, obviously, to do Dundalk in a tight game like that. It gave us belief and momentum and we carried that right through. After lockdown we picked it right back up.

“So we are worthy champions and it (his fourth career league title) is extra special for me because I’m lifting the trophy as Shamrock Rovers captain. Lifting it in front of no fans in two weeks time, that will be different, though. Lifting the FAI cup in front of 35,000 people in the Aviva, seeing the joy on people’s faces . . . for them to miss out on this now is a blow for them and a blow for us too. But I’d still say they went to bed on Saturday night with smiles on their faces.”