Regionalisation may be the key as league adjusts to new reality

Division One will continue to hold secrets to rapidly approaching championship 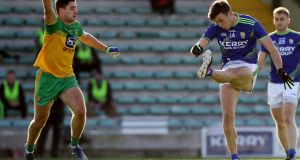 In a normal year, the final weekend of the Allianz Football League (AFL) is one of the great setpieces of the GAA year. Sixteen matches start simultaneously and, as scores fluctuate, relegation and promotion fortunes slip and slide one way and then another.

The top two teams in each division pair off in the league finals and everyone breaks to get ready for the championship in the weeks ahead.

This year’s speeded-up version broke with tradition, and Donegal’s trip to Tralee was allowed a Saturday throw-in to accommodate the visitors’ trek. There were also walkovers and few surprises apart from the music stopping just as Cavan found themselves without a chair.

Even in the strange circumstances of this year’s competition, AFL Division One will continue to hold the secrets to the rapidly approaching championship. No county since Armagh 18 seasons ago has won the Sam Maguire without playing in the top division of the league.

Before the curtain is drawn on this year’s competition – the longest since the calendar year season was adopted 20 years ago – here are four final impressions.

Back when the pandemic was relatively new and the first national lockdown started to ease, there was an optimistic view of the year ahead, one that foresaw gradually loosening restrictions and maybe the return of spectators in modest but growing numbers.

As the year has worn on, that has changed, and the old assumption that 2021 would mark a reset of the old normal has begun to fade. The GAA has acknowledged next year would also be “exceptional”.

One way of addressing the need for continuing restrictions within the framework of the AFL is regionalisation, and it has been discussed by the GAA.

The format in question envisages the splitting of each of the four divisions into two groups of two, to be determined by minimising the geographical distance between the counties, as in the past when the bottom half of the league was broken into Divisions Three North and South.

The winners of the two groups would play off for the divisional title. There would be three group matches and a fourth for the finalists, which would allow room to conclude the two remaining matches in the 2020 league.

The reduction in fixtures would be welcome, as current circumstances have turned the league from being significant revenue-raisers for counties into liabilities in the absence of spectators.

Applied to the 2021 AFL, the new divisions could look like this:

These aren’t official tiers and some involve significantly longer distances than others, principally because of outlier counties, such as Dublin and Kerry in Division One, which are the only counties from Leinster and Munster respectively, and Mayo, similarly the only Connacht county in Division Two.

Hardly surprisingly, as football’s leading county, Kerry lead the roll of honour in all three major competitions: Munster, All-Ireland and League. Saturday’s defeat of Donegal left the county top of the table and in possession of a 21st title.

It remains to be seen will Kerry add to the 10 occasions on which they’ve completed the league and championship double – last achieved by them in 2009.

It did beg the question for one aggrieved Cork man of how many times Kerry had been the best team in the country and clearly just ignored the league. During Mick O’Dwyer’s reign, he took the county to eight All-Irelands in 12 seasons but just one double, in 1984.

That may, however, be misleading. Factor in that the spring competition didn’t start until 1926 – at which point Kerry had accumulated just six championships – and there is still a disparity between 31 Sam Maguires and just 21 Irish National Assurance Cups.

Tyrone’s narrow defeat of Mayo in Castlebar had the effect of relegating James Horan’s team from Division One. It will be the first time the county hasn’t been in the division since 1997 when they finished sixth in Division Two. The following year’s league was based on a mixed-ability structure in order to re-draw the divisions for the 1998-99 season.

This also means that new winners Kerry are now the only county to have been permanent members of Division One since the leagues were reorganised on a four-division hierarchy in 2008.

Even Dublin haven’t a perfect attendance record having been in Division Two for the first season before gaining promotion to what has been the county’s permanent home since.

Donegal’s decision to send a weakened team to Tralee even though they had an outside chance of winning the title again showed the danger of running the league too close to the championship. Declan Bonner’s team were minding themselves for the upcoming championship engagement with Tyrone.

By beating the same opponents a week previously, Donegal had secured Division One status and if Tyrone know their history they’ll be careful, as in 1992 they lost narrowly and unluckily to Derry in the league final but a fortnight later did no better when the teams met in the Ulster preliminary round.