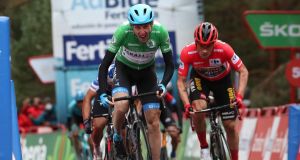 Trouble can come at you from all directions in the three weeks of a Grand Tour. Especially when it runs into late autumn, in which case it can come from the rainy clouds in the sky above.

Like in Sunday’s stage 6 finish of the Vuelta a España, the seasonably colder rain that greeted the riders at the summit finish at Formigal in the central Pyrenees causing plenty of trouble, for some riders more than others. With no sure direction home there could be more to come.

Which is why Dan Martin, who spent much of the evening warming up and drying out on the transfer to Vitoria-Gasteiz, the capital city of the Basque Country, wasn’t only glad on Monday’s first rest day: he isn’t looking far beyond it, and for good reason.

“Historically I’ve never been super good in those conditions,” said Martin, speaking via a Zoom call from his Israel Start-Up Nation team hotel. “In the rain and cold like that, you’re always more nervous. If you forget to eat, or chose to change clothing at the wrong moment, one little mistake can lose you a lot of time, and we saw that with the little mistake from [Primoz] Roglic.”

Indeed we did, team Jumbo-Visma’s defending champion from Slovenia losing his lead and 43 seconds in all to Richard Carapaz, who took over the red jersey, in part after struggling to put on his rain jacket on the penultimate climb of the Alto de Cotefablo; Roglic now sits fourth. Martin also slipped one place from second to third, and now trails the Ecuadorian from team Ineos Grenadiers by 20 seconds, which Britain’s Hugh Carthy from EF Pro Cycling moving into second, a mere two seconds ahead of Martin.

“It was a very tricky stage,” added Martin, “and I was very nervous, especially on the downhills, but I think we coped really well as a team. I felt quite good until the last 3km, where it started to get a lot colder. And my body just froze.

“So overall I’m happy, that very tricky stage is done now, we’re still in a really good position. So that has to be considered a success. It’s been a very, very tough first week, even the sprint stage on Friday was very tough with all the crosswinds, so we’re honestly not thinking about Madrid at all yet.

“I know it sounds boring but we’re just taking it day-by-day, staying focused, ticking off each day as it comes, trying to enjoy it. That’s been working so far. The results the first week have lifted the whole team, and confidence and morale is both high. Overall, mentally, I’m feeling really good.”

It’s certainly been Martin’s best start to a Grand Tour, given he hasn’t yet slipped out of the top three, Thursday’s stage 3 win on Laguna Negra his first win anywhere since the 34-year-old captured stage 6 of Tour de France onto Mûr de Bretagne in 2018. With the equally in-form Sam Bennett adding back-to-back wins for two different Irish riders for the first time on Friday there’s the promise of more to come, although the race certainly isn’t out of Covid-19 trouble either.

All remaining 163 riders and team support were tested again on Monday morning, the results due before Tuesday’s stage 7 start at Vitoria-Gasteiz. With the Spanish government now placing the entire country into a state of emergency, after total Covid-19 cases exceeded one million last week since the pandemic began, there’s no guarantee more stages won’t be altered, or indeed the race finish itself.

Martin is hopeful his form will continue into the second and third week, particularly as he “wasn’t himself” for the first 10 days of the Tour de France, still recovering from a fractured sacrum, sustained 16 days previously.

“With the crash, the Tour became even more of a preparation race, before coming here. Hopefully that will give me an advantage going into the second two weeks here. We’re racing into November, very late in the season, that changes things too, but the organisers are doing a fantastic job, it’s the safest I’ve felt racing all year, the general situation has been impeccable.”

With that Martin points to more potentially troublesome stages to come, including Wednesday’s stage 8 finish on the first category Alto de Moncalvillio, two mountain stages this weekend, including the formidable Angliru on Sunday, before a potentially decisive 33.5km time-trial into Ezaro next Tuesday, not forgetting the penultimate stage on November 7th onto the brutally hard Alto de la Covatilla.

“We know Roglic is very strong in the time-trials, and we’ll need at least a minute or two on him before that, which is why this week is going to such an interesting battle,” said Martin looking at the challenge ahead. “I think a breakaway could decide a lot of stages ahead, but if I have good legs, and the opportunity comes, of course I won’t turn down another stage win. For now we’re more focused on the general classification, how far we can go with that.”

All the way to Madrid, preferably.