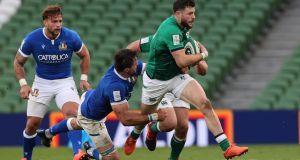 It’s just as well Robbie Henshaw, Bundee Aki and Garry Ringrose have built strong relationships with each other given the musical chairs which all manner of misfortunes have heaped upon the Irish midfield in the last three years.

Aside from each of the three combinations being given plenty of time together in the Irish team, helpfully too Henshaw is now into his fourth season playing alongside Ringrose with Leinster, prior to which he and Aki formed the Connacht midfield that ultimately was one of the rocks in their 2015-16 Guinness Pro12 title success.

So the two have plenty of muscle memory to call upon when suddenly pitched in together again, as was the case halfway through the opening win over Scotland and again in the 27th minute of last Saturday’s win over Italy, not to mention the Welsh and English games in between.

“Yeah, it’s probably old habits, I think,” said Henshaw yesterday in explaining his intuitive understanding with Aki. “I’ve been playing with him for three or four years in Connacht, I know what he’s about and how he operates. Similar to one when I’m playing with Garry as well, I know how he works.”

It’s interesting that such was the experience the pair built in their time together at Connacht that even Henshaw himself instinctively thought it was longer than two seasons.

“It’s kind of like the more games you play and the more habits, you kind of feed off each other’s traits, I suppose, and that’s kinda how it works,” he added. “And then just being close. All of us centres are really close, so myself, Stuart McCloskey and Chris Farrell, we’ve all been a really tight-knit group over the last campaign.”

“So I think once anyone’s called in, you have to know each other really well and I suppose building relationships on and off the training pitch is huge as well, and even just discussing things in front of a laptop, that goes a long way as well.”

Aki’s vocal nature on the pitch was very much in evidence last Saturday, and so it’s hard to believe that, as Henshaw recalled: “When he arrived he was pretty quiet at the start and then he found his feet, but no, definitely the energy he brings, I’m sure you can hear him in the stadium, you can hear him on the mic anyway when you’re watching it. But yeah, the energy he brings is huge and that really gets us going as a collective.

“I think he’s really settled in in the last couple of years and he’s really at home now and he’s getting more and more comfortable in the shirt. He’s just constantly driving us on and bringing that energy which is what is needed when there’s an empty stadium.”

The Henshaw-Aki combination was also in situ on Ireland’s last visit to the Stade de France, in February 2018, when part of the 41-phase attack which culminated in Johnny sexton’s 45-metre match-winning drop goal.

“Just having that confidence in each other to back ourselves and not go into our shells; that’s definitely the thing we spoke about before that game. It’s just to really go after it and not go into our shells and make sure we deliver the best performance because in these competitions, to do well, you obviously have to start well if you are to get your win on the road.”

“That was obviously key to our success that year. That win was definitely up there with one of the hardest games we played because we were always attacking into a brick wall. It was very hard to break them down, but thankfully Johnny’s magic at the end got us over.”

As well as trying to impose their game on the French, Henshaw and Aki will have their hands full in stifling the manifold attacking threats of the dynamic Gael Fickou and Virimi Vakatawa, each of whom is in the form of his life.

“We saw the game they played against Wales on Saturday evening and they’re two world-class players,” admitted Henshaw. “I’ve played Fickou a handful of times now and I think I’ve played Vakatawa twice. Their running threats alone, their offloading skills and both of their footwork is top class.”

“I think for us we need a sock solid performance in D and the key to stopping them is probably shutting down their space early if we can and not allowing them time and space on the ball because that’s probably when they’re at their most dangerous.”

If given time and space, says Henshaw, Fickou and Vakatawa are the type of players who can hurt any time.

“Not only are they good ball carriers and running threats but they’re also really good distributors and are able to get the ball to space. France have improved hugely, they’re moving the ball around and they’re playing like a Toulouse/Racing team. They really have upped their game and played a really nice shape in their attack at the weekend.

“Their defence as well, with Shaun Edwards there, their line speed is quite fast and aggressive so we need to be ready for what’s to come at the weekend. It’s definitely going to be a big step-up.”