Alisson: ‘I believe my faith and working hard helped me in this fast recovery’ 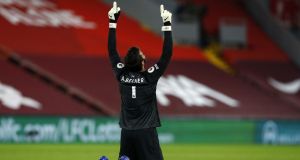 The Liverpool goalkeeper Alisson has attributed his rapid recovery from injury to prayer and six-hour daily rehabilitation sessions at Melwood.

Alisson made a surprise return to Liverpool’s starting line-up against Sheffield United on Saturday having missed four games with damaged shoulder ligaments. Jürgen Klopp initially feared the training-ground injury would put the Brazil international out of action for up to six weeks but was ultimately without him for just over three. The 28-year-old credits intensive physiotherapy and his outlook with halving the anticipated recovery time.

“I pray a lot. Seriously, I pray a lot,” Alisson replied when asked how he was able to return after three weeks. “Also I did a lot of sessions of treatment. I was every day for five or six hours at the club, getting treatment with the physios, working with the fitness department, and after two weeks I was able to be together with the goalie coaches again.

“I wasn’t able to dive but then after two and a half weeks I started to dive. Then, three days before the game, I start to work hard – facing hard shots, doing full-range diving, so then on Friday I gave the green light to the boss. I believe my faith and working hard helped me in this fast recovery.”

Alisson targeted a three-week absence as soon as he told by a specialist to expect a lengthier lay-off and insists he is “100 per cent” comfortable with playing competitively again.

“Every injury you have on the ligament, whether it is your ankle, your shoulder or your knee, you still feel something weird. It’s not pain but you feel it for a couple of weeks. It’s nothing that puts limits on my way to play. I’m really 100 per cent able to play and I am comfortable with that.

“It is good to be back and I’m really happy . . . As soon as the doctor said it was going to be four to six weeks, I said: ‘No Doc – we go to two-three weeks maximum.’ He agreed with me and we go for it. I just want to thank the physios, the fitness staff, the doctors, and the goalie coaches who help me.”

Liverpool host FC Midtjylland in the Champions League on Tuesday with Alisson in line to make his first European appearance since February. The former Roma goalkeeper missed Liverpool’s second-leg defeat by Atlético Madrid last season with a hip injury. His absence was sorely felt as Adrián made decisive errors in the 3-2 reverse that ended Liverpool’s 25-game unbeaten European run at Anfield.

“Not being involved is the worst thing for a football player but unfortunately injuries are part of the job,” Alisson said. “We try to avoid them with prevention work but sometimes they happen. I am glad it was only three weeks but it was a long three weeks, it felt like three months. It was hard not only to miss Atletico Madrid and Aston Villa [the 7-2 defeat this season] because you always want to help your team-mates and do what you love to do.”

Klopp will be without the injured Thiago Alcântara, Naby Keïta and Joël Matip against the Danish champions who, despite losing their opening Champions League game 4-0 at home against Atalanta last week, pose a genuine threat, according to the Liverpool manager.

“We don’t see you as a small club,” Klopp told a Danish journalist. “We see you as a proper challenger in this group. Nobody is part of a Champions League group because they come from a nice city or whatever. Midtjylland are just there because they are a good football team and because they earned the right to be in the Champions League the season before. After an impressive comeback against Brondby [on Saturday] Midtjylland are now top of the table again so they are good again.

“I don’t know how many players they lost since last year but it is just a good football team. In football pretty much everything is possible and we used that from time to time. But I’m sure Midtjylland sees it exactly the same way. They don’t wave the white flag already. There are no smaller teams in the Champions League, there are only teams.” – Guardian