John Cooney called in as scrumhalf cover; Earls likely to take 23 jersey in Paris if fit 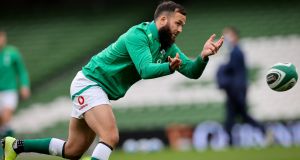 Jamison Gibson-Park is a doubt for Ireland’s Six Nations game against France in Paris next Saturday with a hamstring injury. Photograph: Billy Stickland/Inpho

Jamison Gibson-Park, Keith Earls and Rónan Kelleher will all be closely monitored over the next two days before Andy Farrell and his assistants name their matchday 23 on Wednesday for Saturday’s 2020 Guinness Six Nations finale against France in Paris.

Gibson-Park’s hamstring issues following an assured Test debut off the bench in last Saturday’s 50-17 win over Italy has prompted Farrell to call-up John Cooney, but presuming he recovers, the New Zealand-born scrumhalf looks sure to be retained given the sharpness of his service against the Italians.

If Gibson-Park is ruled out, then Cooney will be vying for the role as back-up to Conor Murray with Kieran Marmion. The Connacht scrumhalf had been promoted along with Gibson-Park ahead of Cooney in the 35-man squad after the latter had replaced Murray in each of the first three Six Nations games.

Earls is finishing his rehabilitation programme at the IRFU’s high-performance centre and a decision on his availability “will be made over the coming days” according to an IRFU statement.

That Earls took some part in last Wednesday’s 15-a-side training session augurs well and with Robbie Henshaw now sure to start in place of the unlucky Garry Ringrose, Earls would seem a natural fit for the number 23 jersey. That was the case for the Wales and England games last February when Ringrose had been ruled out by the broken thumb he suffered in the opening victory over Scotland.

If Earls is not deemed fit, then Farrell and co must choose between the uncapped Munster utility back Shane Daly or one of the other centres in the squad, Chris Farrell and Stuart McCloskey.

All are ring-rusty, Daly not having played in eight weeks and McCloskey in five, while Farrell has played once in eight weeks. Daly, equally at home on the wing or at fullback for Munster, was an outside centre for the Irish under-20s, so while the least experienced of the trio, looks the best fit for that ‘23’ role.

Kelleher was ruled out of consideration for the Italy game with a quad injury and if fit, then a la the opening three games, he is liable to return to the matchday squad. In his absence, Dave Heffernan contributed to the bench’s impact with an industrious half-hour and threw accurately, albeit he was partly to blame for Peter O’Mahony dropping the game’s final restart in the prelude to Paolo Garbisi’s try.