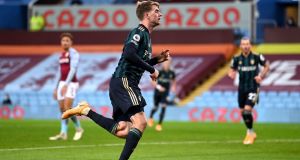 Many people said Patrick Bamford was not cut out for the Premier League. Many people reckoned Aston Villa were about to climb to the top of the table for the first time in nine years.

All those people were made to look idiotic as Leeds ran Villa ragged and clinched victory thanks to a wonderful hat-trick by their centre forward at Villa Park on Friday night. That took Bamford’s tally to the season to six goals from six league games and sent Marcelo Bielsa’s recently promoted team into third place.

Although Villa were aiming for the win that would give them the best start to a campaign in their 146-year history, the atmosphere before kick-off underlined the grimmer singularity of this season. For this was one of those matches where the absence of fans felt especially poignant. The first top-flight meeting between these two noble clubs since 2004 should have been enlivened by hollering throngs, but instead dear old Villa Park was all lit up but barren.

Dean Smith was pleased to be able to send out a familiar cast, deploying the same side for the third match in a row. Marcelo Bielsa had no such luxury, with an injury to his midfield conductor, Kalvin Phillips, compounding the loss of his captain, Liam Cooper, forcing Leeds into a major rejig even if there was only one personnel change from last week.

Pascal Strujik, who played at centre back in the defeat by Wolves, was set the formidable task of orchestrating midfield play the way Phillips normally does, while three of Leeds’ four defensive positions were switched: Luke Ayling moved from full back to central defence and Stuart Dallas shifted from the left to the right, allowing Ezgjan Alioski to start at left back. Then again, Bielsa’s side are all about attack and fluidity.

They nearly proved that in style in the fourth minute with a flowing move that culminated in Alioski serving up a delicious cross for Bamford from the left, only for the striker to send a plunging header wide from 12 yards.

Leeds continued to attack as a clever swarm, forcing several emergency interventions by home players before Villa started to assert their own creative quality. Naturally Jack Grealish was instrumental in that, though Leeds did a good job of tampering his best early work. Except for Strujik, who got booked for a scruffy challenge on Grealish and then risked a red card before Bielsa substituted him after only 21 minutes, introducing Jamie Shackleton in his place.

Douglas Luiz, by contrast, made a superb tackle on Alioski to foil a dangerous Leeds break. Ayling did likewise moments later, dispossessing Ollie Watkins after the striker had pounced on a loose pass across the Leeds box by Dallas.

Ayling saved his team again in the 26th minute, whacking a shot by Grealish off the line after a miscued effort by Trezeguet ran kindly for the Villa captain. The Villa threat continued to grow, with Watkins leading the line intelligently even if Villa could not work a clear shooting chance for him.

Leeds survived a penalty scare when Grealish went down in the box under a challenge from Helder Costa – VAR found no foul – and then the visitors nearly plundered the lead just before half-time thanks to a rapid counterattack. Jack Harrison hurtled down the left and pinged a low cross into Bamford. The striker should have scored but, under pressure from Ezri Konsa, he steered a low shot wide from 10 yards.

And so a quietly riveting first half ended scoreless. Leeds set about trying to address that straight after the interval. Within two minutes Harrison forced Emi Martínez into a save after cutting in from the left and unloading a shot from 16 yards. Then Grealish tried to beat the opponents all by himself and nearly succeeded, scampering past three opponents from halfway and dancing into the area. Illan Meslier made a vital save and then, from the corner, tipped a Konsa volley over the bar.

The importance of those saves was reinforced as Bamford fired the visitors in front. He had started the move, too, before Leeds worked the ball wide to Rodrigo, whose low shot was turned away with one hand by Martínez. Bamford reacted fastest to guide the ball into the net from close range.

It was the first time that Villa had fallen behind since the start of the campaign. How would they react?

It turned out that the more pertinent question was what would Leeds allow them to do? The increasingly impressive visitors began to dictate matters, leaving their hosts with little option but to defend frantically. But there was nothing Villa could do in the 67th minute other than marvel at Bamford’s shooting prowess when the striker collected a pass in the D and swept a wonderful left-foot shot into the net to claim his fifth league goal of the season.

Bamford completed his hat-trick by crowning a brilliant move involving Rodrigo, Costa and Shackleton, the striker lashing a shot into the top-left corner of the net from 16 yards. – Guardian