Connacht come out on top in nine-try clash with Edinburgh 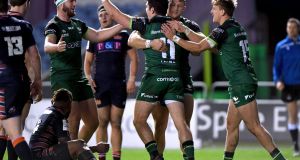 Connacht secured an important in-conference victory in Murrayfield on Sunday evening, consigning Edinburgh to their third successive defeat this season.

Andy Friend’s team produced a energetic display with five tries, as both sides played without their internationals. Connacht with an unusually high seven players tied to the Ireland camp - while Edinburgh, although bolstered by their South Africans and two Fijians, were missing some 17 through injury and the Six Nations.

Three of those South Africans stacked a frontrow which played a part in Edinburgh’s tries, but it was Connacht who enjoyed a 23-14 half-time, courtesy of three tries in a 15 minute blitz, having opened with a Conor Fitzgerald penalty after four minutes.

Although Edinburgh scrumhalf Nic Groom scored the opening try, with outhalf Jaco van deer Walt adding the extras, Friend’s side seized the initiative, capitalising on Edinburgh’s indiscipline. They bagged their first try following a penalty to touch, with Blade opting for a nifty chip and gather, catching the defence on the back foot to touch down.

Five minutes later, from another penalty to touch, Connacht produced a series of short attacking phases before Fitzgerald’s perfectly weighted kick was gathered by Sammy Arnold to touch down for a 13-7 lead.

After Shane Delahunt denied the Scots a try-scoring opportunity, Connacht struck again. Counter-attacking from deep, J ohn Porch scorched Fijian Emoi Sau before off-loading to the supporting Alex Wootton who touched down. With Fitzgerald off the pitch, and Wootton too with an HIA, Tom Daly added the conversion and a penalty for a 23-7 lead.

However, Edinburgh hooker Mike Willemse struck before and after the break, capitalising on penalties to launch their rolling maul. It put the home side back in the contest at 19-23.

Four minutes later Connacht followed suit - Blade again with the chip set up Wootton for his second try, with Daly again adding the extras. The fifth came from Shane Delahunt after a surging run, extending the lead to 19-30.

Although Edinburgh never let up, bagging their fourth try from lock Andrew Davidson, they were forced to settle for a losing bonus point. Connacht, however, took the full five - the first time to do so in the Scottish capital since their Pro12 winning year.