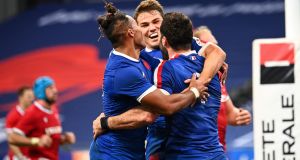 France have just embarked upon a revised six-game, end-of-year schedule which sparked such a ferocious row between the federation (FFR) and the clubs (LNR) that a compromise was agreed whereby no player could play more than three of those matches. But this has merely crystallised how Fabien Galthié and Les Bleus are prioritising next Saturday’s game against Ireland above all the others put together.

It says everything about the importance Galthié is attaching to the Six Nations finale that he used up one of those ‘three’ full-strength selections for last Saturday’s 38-21 friendly win over Wales at Stade de France as a preparatory dry run – same time, same place – for the game against Ireland.

If fullback Anthony Bouthier is ruled out due to the head knock which forced his withdrawal half-way through last Saturday’s win, then his half-time replacement, Thomos Ramos of Toulouse, will wear ‘15’.

If lock Bernard Le Roux is suspended for his act of foul play on Alun Wyn Jones, then Killian Géraci, the uncapped Lyon lock and another of the recent back-to-back under-20 World Cup winners, or Romain Taofifenua, will come into the secondrow.

Otherwise it will be unchanged, after Galthié and his assistants went back to the exact same team which beat England in the opening round last Saturday. Perhaps unfortunately for Ireland, this means the team’s heartbeat, the outstanding scrumhalf Antoine Dupont, as well as goalkicking outhalf Romain Ntamack, tighthead Mohamed Haouas and left winger Vincent Rattez are all back in harness.

Dupont, Ntamack and Rattez would all have been injured for last March’s scheduled finale in Paris, while Haouas would have been suspended. As Wales also fielded a strong, experienced selection which was close to the team which had extended France to a thrilling 27-23 win last February in Cardiff, last Saturday’s performance underlined how France are progressing and seem perfectly primed for next Saturday.

Individually these players add to the collective threat which France will pose Ireland next Saturday in a city where Ireland have beaten France three times in their last 24 visits, dating back to 1972, and have never once scored four tries there.

France were 10-0 down within seven minutes against Wales, but where in the past they might have crumbled like a sand castle, under Charles Ollivon’s captaincy they never looked remotely bothered and stealthily took a 21-13 interval lead.

Dupont pulled the strings, as runners came blisteringly hard off ‘9’ or he linked with Ntamack. He finished off two sweet try-scoring moves with his trademark inside support trailers and nearly scored a third with another, but it was the manner he created their fourth of five tries by Ollivon which summed him up.

When the ball went to ground it was as if 29 players froze in black and white, whereas Dupont remained in colour and in motion. He has an uncanny knack of doing this. He did the same against England when dancing back toward the blindside off a loose lineout and, once again, Olivon was on Dupont’s wavelength to provide the try-scoring support line.

It’s as if, at times, Dupont seems to be thinking a second or two ahead of everyone else on the pitch. He also seems to be made of rubber, the way he bounces off both opponents and the ground, and his footwork is outrageous.

Toulouse have dabbled with him both at outhalf and Ntamack at ‘12’, whereas Galthié just plays them in their best positions. Ditto Gaël Fickou at ‘12’. Wales used the same, fast-up blitz-type defence Ireland employed against Italy and on separate occasions Ntamack and Fickou had the vision and footwork to step back inside and link with Dupont on the inside and Virimi Vakatawa on the outside.

Ireland will have to fill those inside holes as well as push up hard in midfield. Even then there’s Vakatawa’s ridiculous offloading, witness the extravagant flipped ball out of the tackle to Teddy Thomas for Dupont’s first try, or the latter’s ability to conjure a try out of nothing. Witness his blindside chip and gather to seal the win.

Admittedly, Ireland will have been encouraged by France’s aerial fragility and a 16-4 penalty count largely founded on Welsh ability to contest the breakdown.

As for France’s defence, despite being beautifully opened up by Justin Tipuric’s pass into space for Dan Biggar to put Leigh Halfpenny over in the first minute, their line speed effectively negated the Welsh attack. And Shaun Edwards, probably still miffed by Warren Gatland preferring Andy Farrell over him as defence coach on the last two Lions tours, often seems to have a masterplan for unsettling Ireland.

The 26-year-old Haouas, of Algerian descent, came from a tough working-class background in Montpellier and has temper issues, witness the punch on James Ritchie which earned him a three-week ban last February.

He is due to face questioning in a criminal court for armed robbery of a tobacconist next January which date back to when he was 19 in 2014. But having only made his debut against England, Haouas has transformed the French scrum, which was a weakness in last year’s World Cup.

Thus is the core of the side Galthié wants to host the World Cup in 2023. He’s explained that, going into the Six Nations, their average age was 25 with an average of 16 caps per player. Come the World Cup, those averages should be 28 and 40.

But in the short-term, it’s hardly surprising that the Six Nations carries precedence over the Autumn Nations Cup for Galthié. France haven’t lifted the trophy since 2010, making this their most barren run since the 1920s, and besides the tradition and kudos that goes with the oldest international competition in the history of the sport, there’s also the wo nga.

Come the uncivilised 9.05pm kick-off local time – even if Paris will be in curfew – the likelihood is that England will have put the title beyond the reach of both France and Ireland, bar Andy Farrell’s men obtaining an unlikely bonus-point win of their own.

The difference in prize money between finishing second and third is about €1.1 million, ie €3.85 million as opposed to €2.75 million, while it it’s within grasp at all, winning the title would net a cool €6.6 million.

Sums not to be sneezed at.