Manchester City must plan for Marseille and beyond without Sergio Agüero 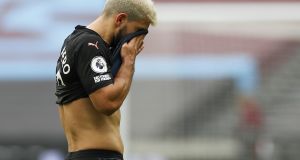 Manchester City striker Sergio Agüero will be sidelined for a month with a hamstring injury. Photograph: Paul Childs/EPA

Sergio Agüero is almost certainly out for a month because of his hamstring problem in a further serious injury blow to Manchester City.

The club’s record goalscorer sustained the injury in the draw at West Ham on Saturday and means Pep Guardiola is again without his two frontline strikers – Gabriel Jesus also has a muscular problem.

Agüero was only three games into a return from the serious knee injury he sustained in June but is now unlikely to return until after next month’s international break.

Guardiola was asked about the prognosis for the 32-year-old. “I don’t know, it depends on the injury: 10-15 days is the minimum,” he said. “If it’s a little bit longer it will be three weeks, one month. The muscular [injuries] normally don’t move away from these parameters. And the case of Sergio will be the same, there will be no exception.”

Asked if whether Agüero, who is out of contract in the summer, signing a new deal is dependent on staying fit, Guardiola said: “I don’t know, I don’t want to talk about it because I am not involved with this. If I should be involved in contracts, maybe the day should be 48 hours, not 24. What I want is Sergio fit, for himself and to be enjoying football. That will dictate the future.

“We miss him a lot, in certain games. What he has done for this club is outstanding, he will be a legend of this club. We want to enjoy him before [he leaves] but this depends on his physicality and his physical condition. Hopefully he comes back and will be as fit as possible.”

Given Agüero’s age and recent injuries plus Jesus also being unavailable it was put to Guardiola if he regretted not buying a striker in the last window.

“We considered it,” he said. “We thought about it – maybe another type of striker but we could not. I think the club do what they can. If you decide to buy a striker, it has to be a striker in the league of Gabriel and Sergio but we cannot afford it.

“That is the reality. I’m not saying the club didn’t want to do it, not just in terms of strikers but in every position – they wanted to make as strong a team as possible. But we thought: ‘Okay, Sergio is back [soon] – and we didn’t expect Gabriel to be injured, but sometimes it happens.”

Agüero was taken off at half-time at West Ham. “We didn’t rush [Sergio] back [from the knee injury]. We were incredibly patient, we didn’t force the doctors. When people tell me he’s ready [then I decide],” Guardola said.

“Of course we knew he was not in the best condition, and without full training. But it was important for him to start playing 55, 60 minutes.

“We tried to avoid in the last 25, 30 minutes muscles getting tired. Unfortunately one action in the first half caused the injury. He was unlucky, he went to stop a long pass and felt something, hopefully he recovers as well as possible.”

Agüero will miss the Champions League game at Marseille on Tuesday night, the visit of Olympiakos next week, plus the Premier League game against Sheffield United and almost certainly the match against Liverpool on November 8th.

Guardiola is also without Fernandinho and Benjamin Mendy for Marseille, while Nathan Aké is a doubt though Aymeric Laporte is fit again. A compressed schedule as a result of the coronavirus pandemic is causing the heightened number of injuries.

Guardiola said: “We don’t have time to train much. On Sunday everyone got the statistics that in the Premier League we have 47 per cent more muscular injuries than the same period last season.

“If people [authorities] can do something about this it will protect the players, if not it will increase. We have to protect them as best as possible – [or it will be a case of] the strongest ones surviving, the others falling down.

“We need everyone this year with this amount of games, absolutely everyone sooner or later. We are not an exception compared to the other teams playing in Europe – this is the reality.” – Guardian