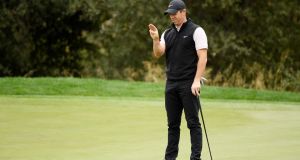 Rory McIlroy lines up a putt on the 10th green during the third round of the Zozo Championship at Sherwood Country Club in Thousand Oaks, California. Photograph: Harry How/Getty Images

Rory McIlroy’s focus is right where it should be, on the one tournament that will potentially define his career. The Northern Irishman has two weeks to rest and prep for the rescheduled Masters at Augusta National, after which he will put his clubs into cold storage for two full months before reappearing on the PGA Tour.

And, after getting endless mixed messages from much of his play since the PGA Tour’s resumption, the 31-year-old can see the glass more than half-full as he optimistically views the upcoming Masters (November 12th-15th) with a planned reconnaissance mission in the meantime to work out the different nuances of a wintertime tournament at the famed Georgia venue.

“I might go up once and spend a night and play a couple of days, or maybe go up a couple separate times,” said McIlroy of his plans to play a number of practice rounds in advance of Masters week itself. “I’m not playing Houston, Augusta’s my next one and I’ll take a couple of months off after that.”

McIlroy’s first appearance of 2021 is likely to be the Farmers Insurance Open at Torrey Pines in San Diego at the end of January.

And while he gets ready for that latest tilt at the Masters, in a bid to claim the career Grand Slam, McIlroy is intent on trying to be as “careful as possible” to avoid coming into contact with the coronavirus.

“I try to take all the necessary precautions. I’m loading up on zinc and magnesium and vitamin D and all the stuff that’s said to maybe help protect you from it. I try to do my part to stay as safe as possible,” he said, also affirming he is of the opinion that there will be less hype this time when compared to the traditional springtime staging. That, he believes, is a good thing. “I sort of like this better.”

McIlroy, without a win this year, actually had 29 birdies in finishing tied-17th behind winner Patrick Cantlay at the Zozo Championship and took his ability to make so many birdies as a positive. “I think it’s easier to eradicate bogeys than it is to find birdies . . . the bad stuff, I think that’s easier to get rid of,” he observed of why he was taking so much optimism from his play with the short stick.

Indeed, McIlroy has also taken on board a past conversation he had with Phil Mickelson. “He always tried to get his short game so good at Augusta so then he could be ultra-aggressive with the second shots knowing that he had a short game to bail him out if he did miss on the wrong side. So, you try to get your short game really sharp and get everything else sort of following that,” said McIlroy.

With five top-10s in his last six Masters appearances, McIlroy’s return in just over a fortnight’s time for this unique staging, has him focused.

“I think all the work leading up to Augusta . . . is getting your game in shape that you’re comfortable hitting the ball both ways, hitting shots that you need to hit, and then if you go into the week with that comfort in your game, then the preparation becomes very important, then you can actually prepare for any sort of scenario you might encounter while you’re playing the tournament.”

While McIlroy’s route to the Masters will be a direct one, Shane Lowry and Graeme McDowell plan on playing in the Houston Open next week to sharpen their games. McDowell, incidentally, has also confirmed that he will return to defend his title in Saudi Arabia next February where current world number one Dustin Johnson and newly crowned US Open champion Bryson DeChambeau are also committed to playing.

“From the high of winning the 2020 Saudi International in February against such an amazing field we very quickly had to contend with all that Covid-19 has thrown at us since, so I think I was lucky to be able to hold onto that awesome winning feeling through the darker parts of lockdown. I am really looking forward to getting 2020 over and having a fresh start to 2021,” said McDowell in confirming he would defend.