Jamie Vardy comes on to score winner at Arsenal 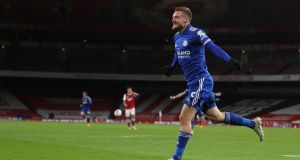 Perhaps, to save everybody’s time, the first 80 minutes of a tight affair might have been forsaken. The one sure thing about a meeting between Leicester and Arsenal is that Jamie Vardy will score and he did not disappoint, even though he had only half an hour to make an impact here.

Vardy had started among the substitutes, a calf injury having ruled him out for the previous fortnight, but as soon as he emerged the complexion changed. Leicester had absorbed a vigorous first half from Arsenal and perhaps it was part of Brendan Rodgers’ plan that, having done so, they could win this game from the bench.

That is exactly what happened and Vardy was not the only replacement to make that so. Cengiz Under had barely touched the ball when he was released by Youri Tielemans’ exemplary deep pass and, running into the right of the box, had to decide whether to pass or shoot. His choice, a clipped cross onto Vardy’s head, was perfect and the finish emphatic.

It was Vardy’s 11th Premier League goal against Arsenal, his 10th having been an even later equaliser here in July. This one maintained Leicester’s perfect away record, gave them their first win at Arsenal since 1973 and took them into fourth spot, while perpetuating the questions about the hosts’ ability to break teams down.

That issue has been well documented but Arsenal served up an opening 45 minutes that, while hardly a festival of invention, could not be faulted for intent. It was as assertive a half as they have produced this season; for long periods Leicester were forced unnaturally deep and required, in effect, to operate with a flat back five.

They did enough to have gone in a goal up. Alexandre Lacazette had the ball in the net within four minutes, flicking on Dani Ceballos’s corner and watching it float across Kasper Schmeichel. The flag went up immediately but the volume of Arsenal’s celebrations suggested they saw nothing amiss and Lacazette could, after all, only have been onside. A VAR review showed an offside Granit Xhaka jumping over the ball and, in the eyes of the law, impeding Schmeichel’s view; it looked by no means a cut and dried offence.

Lacazette should have rendered that academic shortly before the half-hour after fine work from Kieran Tierney, who tamed a diagonal pass from David Luiz and drilled the most inviting of centres across goal. It only needed a meaningful touch from Lacazette, who was lunging head first, but Christian Fuchs’ presence was enough to distract him and the ball snicked wide.

Tierney gets better and better. At this rate he will soon rival Andy Robertson as the league’s most effective attacking left-back and two more precise crosses created half-chances. One was looped harmlessly by Lacazette to Schmeichel, the other was headed over at the far post by Pierre-Emerick Aubameyang.

There had been plenty of discussion about Aubameyang’s best deployment, his now-familiar left-sided role having yielded few chances since the opening day. Here it raised eyebrows to see him start on the right; that did, at least, give Bukayo Saka a chance in his favoured position and one link-up with Lacazette saw the teenager fire at Schmeichel.

Perhaps Arsenal felt emboldened by the presence of Thomas Partey, who Mikel Arteta had described as a one-man midfield as they chased Thursday night’s game at Rapid Vienna. Partey certainly exudes authority and security they have long missed, but Leicester seemed there to be shot at in any case. They are still missing several key players and it told in their lack of bite. James Maddison, starting in the league for the first time this season, lofted wide within two minutes after a poor Bernd Leno clearance had recalled the keeper’s performance in Austria, but they constructed little else before the interval.

Three minutes into the second half Dennis Praet wasted a good chance to play in Maddison and, in the process of chasing back, David Luiz pulled up. He could not continue, Shkodran Mustafi entering in his stead; that was a blow for Arsenal given the Brazilian’s passing had, jointly with Tierney’s maraudings, been their best source of creativity. Maddison immediately had another go at fooling Leno and then was wayward with a free-kick; the flow had become more even and, with half an hour left, Rodgers sought to capitalise by unleashing Vardy in Praet’s place.

Soon enough Arteta followed suit by introducing Nicolas Pépé for Saka. He had needed to do something, because since the interval Arsenal had laboured. It meant Aubameyang was planted back out on the left and the results were almost instant: when the captain dug out a cross from near the byline, Schmeichel had to beat away the onrushing Hector Bellerin’s full-blooded volley.

Yet Leicester were hardly being stretched. Their 19-year-old centre-back, Wesley Fofana, is a sensational prospect on this evidence and marshalled Lacazette with confidence. On one occasion Fofana launched a counter with a 50-yard run upfield; he looks quick, tough and clever, and grew into this game along with his teammates.

Their increased confidence bore fruit in Vardy’s clincher. Arsenal had no response and the smash-and-grab could had been more emphatic had Leno not blocked from Vardy before the end. - Guardian