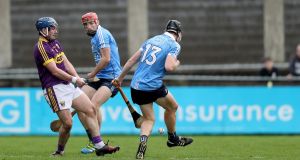 You know what to make of games where winners come away less satisfied than losers. Or in this case, a Wexford victory slightly paling compared to a Dublin defeat.

Because after lording much of the first half, Dublin played most of the second half a man down, adding only one point in the last 25 minutes, and still manager Pat Gilroy seemed perfectly content.

And seemingly off the pace for the first half, Wexford promptly set that pace in the second, hitting 1-10 without replay, and still manager Davy Fitzgerald sounded a little worried.

For now, it’s Wexford who set up the Walsh Cup final date with Kilkenny next Sunday, while Dublin get a little breather before the league starts for both teams the following weekend.

“We put in a seriously intense shift up to that point, and you are going to struggle once you go a man down, a huge influence on a game in January,” said Gilroy, who lost chief scorer Paul Winters to a second yellow card, 11 minutes into the second half, at which stage Dublin were still up by four points; they only added more one point, in added time.

“We missed a good goal chance soon after that, and it took its toll in the last 15 minutes. Our intensity completely went out of it, we changed a couple of lads, and it came back a little bit towards the end.

“It is January, you are going to expect to see that, but the first 50 or so minutes of that was very good, very pleasing for us. We are working towards the league, working them during the week, and they’re not going to be as fresh at the weekend as they would be if you were going into a league game. That’s all part of it when you are working the whole panel, so this has been a great weekends’ work.”

Indeed Dublin also played a challenge against Waterford on Friday evening, Gilroy continuing to experiment with players - new and old: Dublin used 46 players in their three games in this competition, Gilroy confirming that Conal Keaney was back on board on 2018, along with the likes of Joey Boland and Johnny McCaffrey, who was back at his midfield berth for this game.

“We’re not worried about results at this time of year,” added Gilroy. “It would have been nice to get a game next weekend but we won’t be losing any sleep over it either, and we should have everybody available to us by the time the Offaly match comes (Dublin’s opening game in Division 1B)”

What is certain is that Dublin are already a more physical version than recent years: Tomas Connolly, brother of Diarmuid, showed plenty of that around midfield, Winters is adding size up front, Fergal Whitely adding pace and physicality.

He’s also included some of the pre-dawn training sessions which served Dublin’s footballers so well in winning the 2011 All-Ireland under Gilroy; not that he’s near done yet. “Plenty of things to work on, should have been more clinical in front of goal, but their appetite for work is phenomenal. You’re putting them under pressure at the moment, they’re not as fresh as they could be, but that’s fine.”

For Davy Fitz, any thrill of watching Wexford’s ease over Dublin in that last quarter appeared to be the lost in his concerns over what happened in the first half: Cathal Dunbar’s goal on 51 minutes set that comeback in motion, Paul Morris, Paudie Foley, Kevin Foley also in excellent form, but again the extra man was telling.

“I think the man being sent-off was the change, gave us more room,” said Fitzgerald, whose team played a mostly orthodox formation. “But I still think playing like that we won’t survive in Division 1A, we’ll be out the gap and the lads know that. We had a lot of our team out there, and you just can’t start like that. We’re not too far away. I definitely thought Dublin were moving a lot better. I’ll tell you know straight, I’ll be afraid of my life playing Dublin in the championship.”

When of course it’s all about the winning, no satisfaction with losing.

Matsuyama: ‘hopefully I’ll be a pioneer and many other Japanese will follow’ 07:42
Matsuyama makes Masters history for Japan; Irish rowers win gold and silver 07:24
Leo Cullen: ‘a good chunk of the guys who are injured will be back’ 06:15
Rachael Blackmore’s Grand National victory resonates around the world 06:00
Louis and Robinson may have died broke but their legacy is timeless 06:00