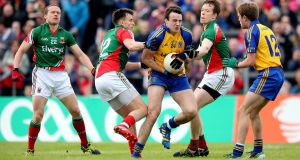 Mark Nally in action for Roscommon in the 2014 Connacht championship. Photograph: Inpho

Longford have recruited the services of former Roscommon footballer Mark Nally for the 2018 season.

The Roscommon Gaels clubman, who represented the county’s Under-21 team and made three championship appearances for the Roscommon seniors in the 2014 season, could feature for Longford this weekend. He scored a point coming off the bench in Roscommon’s one point Connacht semi-final defeat to Mayo four years ago.

Longford manager Denis Connerton confirmed to The Irish Times that the 24 year-old was training with his squad after declaring for his parents’ home county. He remains, however, committed to his club team in Roscommon.

“We’ve been looking at Mark’s performances for quite a while now, and we knew about his connections and that he hasn’t been involved with Roscommon,” explained Connerton. “So we asked him in, and he obliged. He’s a big lad, and he’ll be with the team on Sunday.”

Longford play Meath in the O’Byrne Cup semi-final in Navan on Sunday. Connerton’s son Liam - recovering from a cruciate ligament injury - Shane Kenny and Ronan Sweeney are all long-term injuries in a young squad which contains 12 Under-21 players from last year.

Meanwhile former Leitrim captain (in 2012) Paddy Maguire has joined Dublin club St Brigid’s. He isn’t currently involved in the county squad, although the door has not been closed on the 28 year-old.

Leitrim manager Brendan Guckian told The Irish Times; “It’s very difficult on him with, as we all know the demands on a county footballer nowadays.

“He’s been in Dublin for the last six months, he’s working there as a safety officer, working night shifts. So he’s not on the panel at the moment because of work commitments.

“He’s not in our immediate plans, but no we’re not ruling him out either.”

St Brigid’s is the club of Dublin selector and former Leitrim footballer Declan Darcy, while current talisman Emlyn Mulligan transferred to the 2011 Dublin senior champions for four years up until the start of last season.

Guckian says preparations are going well for the new season. Now into his second year at the helm, he says he’s happy with his current squad and glad to welcome Eoin Ward back into the county fold for the first time in eight years.