Meanwhile, Rory Gallagher got a win on his return to Donegal with Fermanagh 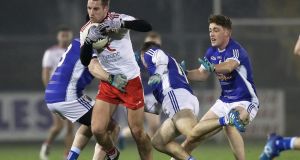 Tyrone cruised their way into the semi-finals of this year’s Dr. McKenna Cup at a foggy Kingspan Breffni stadium.

In what was a veritable cakewalk,the visitors demolished their toothless hosts despite spurning four gilt-edged goal chances en route to amassing an unflattering 0-11 to 0-1 interval lead.

Bryan Magee converted a free in the 40th minute to end a barren period for Cavan but normal service was soon restored with a brace from Peter Harte.

Tyrone goalkeeper Morgan saved at point-blank range from centre-back Ciarán Brady when Cavan created their only goal chance of the night.

The lights remained stuck on green for the O’Neill county with man of the match Harte at the heart of everything the visitors did well.

Tyrone waited until the final eight minutes to put the icing on the cake with goals from Niall Sludden and Matthew Donnelly.

Fermanagh are through to the semi-final of the Dr. McKenna Cup after their three point win over Donegal in Ballybofey.

Rory Gallagher, back on Donegal soil as Fermanagh manager, will take a little satisfaction from the result and he will be even more happy with the performance of returned Seamus Quigley, who finished with 1-7 and was the main reason for the Maguire county win.

Fermanagh started well going three points ahead before Donegal hit 1-5 without reply to go five clear on 25 minutes. The goal was a well finished effort by Jamie Brennan after a great build-up.

Donegal led by 1-5 to 0-5 at half-time but Fermanagh came out much keener in the second half and were level before Quigley got on the end of a Paul McCusker centre to fist to the Donegal net.

After that the sides swapped points but the margin never came below three points and it was comfortable enough for Fermanagh in the end.

A late Niall Toner goal snatched victory from the jaws of defeat for Derry at Celtic Park.

Winless Down had led for almost the entire contest before Toner broke free to drill the ball home past Shane Harrison.

Goals from Sean Dornan and Kevin McKernan saw Down run in five points up at the break, ahead 2-7 to 0-8.

The thick fog in the Derry air played havoc with spectators and players’ visibility alike but it was the visitors that made the most in the limited light. Down boasted a fairly decent hand so early in the season with Shay Millar and Kevin McKernan taking the attack to a rookie Derry defence.

The hosts themselves sprinkled a very youthful line-up with a couple of more seasoned performers in the shape of Mark Lynch and Enda Lynn, who along with free-taker Peter Hagan shouldered Derry’s first half scoring burden.

Derry chipped away at their deficit after the interval before Toner’s late heroics to leave Derry on two wins from the opening two games.