Given the new championship format, teams must hit the ground running earlier 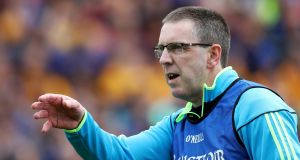 Gerry O’Connor: “We are effectively playing two National Leagues this year, except the ground conditions are going to be a lot harder the second time.” Photograph: Tommy Dickson/Inpho

“An Irish solution to an Irish problem,” laughs Gerry O’Connor, Clare co-manager, when the subject of tomorrow’s Munster Hurling League final comes up.

Their game against Limerick was down in the fixture list as a round-robin encounter but since they’d both made it to the decider anyway, the decision was taken to call this the final and have done with it.

It has the dual benefit of giving both sides a bit more breathing space ahead of the start of the league and avoiding a pull-and-drag next Sunday when the first round of the Fitzgibbon Cup is to be played. The second week of January and already the game is being squeezed until the pips squeak.

O’Connor and Donal Moloney won’t cry over an unexpectedly spare weekend. At training the other night, Moloney reminded everyone that if the league goes well and they reach the final, they’ll have to play eight games in nine weeks, which will add up to them having played 11 out of 13 weekends before the end of March. This is a season like no other and everyone is having to adjust as they go.

“I think if we’re being honest, we’re all flying blind a little bit here,” O’Connor says.

“I think we’ve got to use the National Hurling League and try to replicate the conditions we will face in the championship. The ground conditions will dictate that, the pace of the game will change in the summer but the recovery aspect of it all will be the same.

“It has focused us a lot more to be in tune a lot earlier in the season than we would have been. And that’s a good thing because you can set out your goals a lot earlier and you can plan with a lot more intent. And I think the players are looking forward to it more than anybody because they have been crying out for more games and less training.”

No kidding. Especially in 2018 when the annual winter slog has started earlier than ever for squads nationwide. The Munster Hurling League final might only be a glorified challenge match but every player will take it over the alternative.

“The biggest single difference is that this time last year, we were probably gently going into the National League knowing there were enough gaps built into the schedule to continue to do some pretty heavy training in between games. This time around, we have done more conditioning work in December and January than we would have 12 months ago.

“Every management team in hurling and football are going into this now with an unknown factor hanging over it so I’m not saying we have got it right. But looking at it, I don’t believe we will have a lot of opportunity to do heavy conditioning work throughout the league when it starts and there certainly will be no opportunity to do it in May or June.”

One offshoot of the new schedule is increased panel sizes all across the country.

O’Connor says Clare were always going to freshen up over the winter anyway but a combination of retirements (Brendan Bugler, Darach Honan and Patrick Donnellan), injuries (Aron Shanagher out for the year with a cruciate) and the likes of Cian Dillon and Colm Galvin going travelling means they’ve added 11 new faces since the end of the 2017 championship. When they get everyone back, they’ll be working off a panel of “30-plus” players, he reckons. Which bring its own challenges.

“I think that’s going to become a huge factor for all teams this year. It’s almost universally accepted now that you’re going to have to have a large panel – you’re going to be using much more than the 19 or 20 that you relied on last year. You will be calling on number 24, 25 and 26 on your panel far more regularly than was previously the case.

“If those guys haven’t featured on a Sunday but you expect them to play at a high level the following weekend, then you’ve got to have them on a different strength and conditioning regime and a different hurling training programme to everyone who actually has played.

“We’ve talked about this among the management team – the league really is going to be a period of working through things like this and making sure that when the summer comes, we have a programme in place.”

Key to that will be using the coming weeks to gauge how best to fill the time between games. The championship summer is going to be rat-a-tat stuff. Clare play back-to-back games against Cork and Waterford to start in Munster, then skip a weekend before finishing off against first Tipp and then Limerick.

In 2017, they played three championship matches in seven weeks; in 2018, they’ll have at least four games in five weeks. The key, reckons O’Connor, is getting used to it now rather than when it happens.

“The biggest opportunity to improve week on week is going to be in recovery. You’re not going to be doing conditioning or hurling training of any great substance from one Sunday to the next when the championship starts. The opportunity we’re going to have in the league is to learn what you can about what it the optimum method of recovery from game to game, particularly when there’s a week turnaround.

“I do believe that the management, coaching staff and players that learn the most about how to recover for the players that played and how to keep a training programme going for the players that didn’t play will be the ones who perform best. I think it will be a determining factor heading into the championship. We are effectively playing two National Leagues this year, except the ground conditions are going to be a lot harder for the second one.”

Interesting times ahead. For everyone.