Elsewhere Roscommon saw off Sligo with an impressive performance at Kiltoom 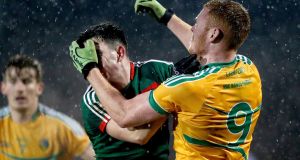 Aiden Flynn punched a goal three minutes into added time to give Leitrim a deserved share of the spoils against Mayo in the FBD League in Castlebar.

In front of 1,696 supporters at MacHale Park, Mayo kicked the last four points of the game to pull clear in the closing stages, but Benny Guckian’s troops staged the comeback to stun a Mayo side, that lined out with most of it’s leading players due to a team holiday.

With Alan Freeman leading the line, Mayo raced into a 0-5 to 0-1 lead after 17 minutes play, but suddenly the game was turned on its head as Leitrim blitzed their weakened rivals.

Damien Moran, Brendan Gallagher and Eoin Ward had Leitrim level by the 32nd minute before Keith Keegan and Aiden Flynn gave Benny Guckian’s side a 0-8 to 0-6 lead at half-time after a blistering six unanswered points.

Freeman saw his penalty saved brilliantly by Leitrim goalkeeper Diarmuid McKiernan early in the second half, but Jason Gibbons and Adam Gallagher soon found the target for Mayo to square matters.

With nine minutes remaining Adam Gallagher edged Leitrim ahead one again, but after Mayo kicked on in the closing minutes, Flynn earned a draw with his 73rd minute goal.

Elsewhere, Cian McKeon fired two goals in the opening 11 minutes as Roscommon picked up a second FBD League win of the year and claimed a 3-19 to 2-10 win over Sligo at Kiltoom.

Diarmuid Murtagh was on song in Roscommon’s win over Leitrim and also found his form last night with his side’s third goal four minutes from the interval, which gave Roscommon a 3-8 to 0-8 advantage.

Diarmuid Murtagh and Finbar Cregg stretched Roscommon’s lead after the break, before Pat Hughes and Adrian Marren hit back for the Yeats men, but a run of four unanswered scores ensured Roscommon were easy winners even when Marren and Kyle Cawley hit late goals for Sligo.