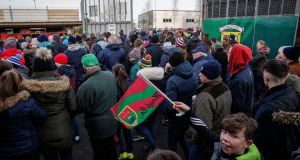 Supporters leaving MacHale Park in Castlebar on Sunday after the Connacht FBD league clash against Galway was called off. Photograph: Ryan Byrne/Inpho

Both the Connacht and Ulster councils are hopeful that the weekend postponements of matches won’t drastically affect the running of their pre-season tournaments.

Connacht CEO John Prenty further acknowledged that calendar pressures played a role in the late decision to call off the Mayo-Galway match in MacHale Park. The provinces had to postpone a number of matches on Sunday because icy weather left pitches unplayable in venues. There was criticism from supporters and team managers of the late decisions made at matches, especially in Castlebar and Clones.

Prenty, who wasn’t in attendance in MacHale Park because of a wedding, said that it had been hoped that the sun would thaw the pitch surface.

“Only a few spots caused particular difficulties in Castlebar and the height of the stand there meant that the sun doesn’t get a great chance to hit the pitch. We probably could have called it off earlier but left it as late as possible because of the difficulties associated with rescheduling.”

This year sees the GAA calendar compressed on a trial basis in order to create additional space in the schedules for club matches. The national leagues will start a week earlier at the end of this month.

There were calls from some pundits, notably former Donegal All-Ireland winner Martin McHugh, to reconsider the future of the pre-season tournaments in the light of fixtures’ pressure and weather conditions in January.

“There’s a future if counties want some sort of competitive preparation for the league, as it provides structured fixtures. There was always a rule that pre-season competitions had to be over before the first round of the league or completed midweek under lights. We got that changed so that we could use weekends and our final is 17th February (Saturday). Our group games are fixed for the next two weekends and we’ll meet that schedule.”

Ulster chair Michael Hasson echoed the Connacht CEO’s opinion and said that potentially just one semi-final in the Bank of Ireland McKenna Cup would be affected.

“I think it’s going to remain as it is and we have to work it in, in the time available. I do think that 4G pitches have a role to play in this. There have been developments in pitch technology and the wider availability of floodlights and they have been major pluses in fitting those fixtures in at short notice.”

Although improvement in pitch drainage has greatly reduced the number of postponements with surfaces better able to take rain, frost and ice aren’t as easily combated.

“The only way you can guarantee that is the use of underground heating which would only really be needed for a few weeks in the year so I can’t see that happening anytime soon,” said Hasson.

There was also criticism of the provincial councils for not providing refunds to the crowds that turned up – around 2,000 did so in Castlebar.

Connacht Council officials explained on Sunday that security protocols meant cash isn’t kept at grounds and is moved on as it comes in with supporters being given vouchers for another match.

“You’d probably need a float of €20,000 to cater for that,” said Prenty, who pointed that refunds are available to those who genuinely can’t attend another match.

“It’s a security issue and we move cash on during the afternoon. National policy is not to give a refund on the day but to give people a ticket for the refixture. We extended that and gave people a voucher to go to whatever game they wanted to in the competition.

“If they’re genuinely unable to attend another fixture, they come back to us with the voucher that was issued and we’ll give out a refund. Obviously if people were just back for Christmas we’ll look after them.”

Hasson said that Ulster try to call off fixtures before turnstiles open and pointed out that half of the spectators had season tickets for the competition.

“Ulster’s season ticket for the competition is very good value and a number of counties buy into that for €25 or £20 so about half the crowd have those and it entitles them to go to all your county’s matches (three group, semi-final and final).

“People can write in with proof they’ve been there and we’ll consider refunds but we’d try to avoid it because of some of the abuses of it but it does happen in genuine cases.”