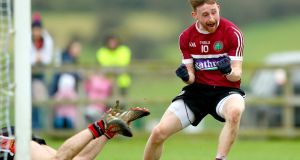 Ciarán Corrigan’s second-half goal sent underdogs St Mary’s College, Belfast into the final of the Sigerson Cup after they beat UCC at the Connacht Centre of Excellence.

St Mary’s came back to lead 1-6 to 2-2 at half-time, after they conceded two early goals, by Ian Maguire and Cathal Bambury.

Matthew Fitzpatrick scored St Mary’s first-half goal, and then Corrigan stepped up to earn them a place in the final against reigning champions UCD.

UCC made the better start, and after Ian Maguire fisted their opening goal in the fifth minute they were in charge.

And it got worse for the St Mary’s from Mark Reid’s kick-out, when Ian Maguire intercepted the ball, and Bambury amplied the finish.

It was a devastating 30-second blitz by UCC, but they couldn’t build on that until the 22nd minute when Bambury added to his tally with a point.

In the meantime, Kevin McGeary scored two frees for St Mary’s, Oisín O’Neill added another and Fitzpatrick struck their goal in the 17th minute. Fitzpatrick scored a point in the 26th minute to draw his side level, and by the time O’Neill scored his third point of the half, St Mary’s had a one-point lead at the interval.

Even though Conal McCann got a black card in the 30th minute, when he hauled down Stephen Cronin, and McGeary followed him to the line, also with a black card after half-time, St Mary’s stayed in the game.

UCC full-forward Killian Spillane kicked two frees to give his side a two-point lead by the 48th minute, but then Corrigan goaled and that changed the game.

Brian O’Driscoll scored a late free for UCC to bring them within one, but Adrian Spillane got red following a black card in the 58th minute – he had already received yellow. And when Alan O’Donovan was shown a straight red UCC were out.