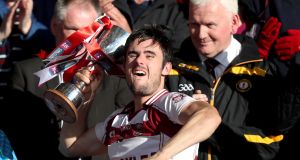 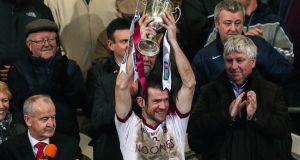 “It is not even a village,” clarifies Seán McGuigan, of the place that has, over the past 12 months, become the talk of the town. On Saturday last, even as the Ireland’s sports antennae was directed at Ireland’s happy rugby destruction of Italy over in sunny Rome, Slaughtneil’s senior football team was busily producing the shock of the day.

Somehow, the Derry champions just keep on going, season in and season out. The vague assumption was that the wonderful run of their football team would come to a halt against St Vincent’s.

You know you are in Slaughtneil when you reach the bottom of the Glenshane pass and take a right. The pitch is there, at the bottom of the Sperrin mountains. The founders of the club used to meet in an abandoned American military hut. They’d chat about the likelihood of fielding a team for the McGlinchey Cup. From those conversations to the ones which occupy the club committee now is the equivalent of space travel.

“You have to pinch yourself,” McGuigan allows.

So where, in the realm of brilliant and improbable stories, does Slaughtneil’s adventure rank? Already, it must sit among the very best GAA moments. Their town land is comprised of around 350 households. The most well known of those belongs to Paddy Bradley, a local architect, whose design brought Kevin McCloud over to shoot an episode of Grand Designs.

He is also a first cousin of Patsy and Paul Bradley, who play on the team. Club championship history is heavily decorated with teams featuring brothers, twins, cousins, in-laws; extraordinarily tight units built around weddings, funerals and planning permissions.

Slaughtneil has an element of that but their story is one of steadiness. Since their first year in 1953 they have been a consistently dependable force in the volatile football heartland of south Derry. They contested and lost their first senior final to Bellaghy in 1969 and slipped into intermediate in 1982 after deciding not to compete in 1981 as a mark of respect for the hunger strike protest in the Maze prison. They promptly won the intermediate championship and returned to senior, where they stayed until they won their first Derry football title in 2004.

That probably wasn’t a huge surprise: teams spark in the dense pocket of football passion that defines the southern tip of the county. But over the same decades, they were diligently and patiently establishing themselves as an excellent hurling club as well.

Maybe this is where the Slaughtneil story slips into the fantastic. The GAA has spent a century trying to protect and promote hurling. Nobody had even held a hurl in Slaughtneil before Denis Cassidy arrived home with one, a memento from his day out at the 1963 All-Ireland hurling final. The story has become well known over the past few months: how they shaped other hurls from that prototype using Tilley lamps to light Cassidy’s shed that winter.

And then they just began practicing. It was Cassidy’s nephew, Thomas, who had the vision of turning Slaughtneil into a hurling force. Except maybe that’s unfair – he just wanted to coach the game, right until his death, at the age of just 55, last winter.

“My God, that man loved hurling and camogie,” says McGuigan. “He would have trained a lot of the boys on our hurling team now. It’s one of the reasons Chrissy [McKaigue] talks about him all the time. Thomas started off his career.

“A few weeks before he died I was putting the lights on in the pitch and the camogie team was training on the bottom pitch. Thomas was in his car and he wasn’t able to look out the driver’s window. He had to watch through the tail of his eye through the windscreen because he had no strength left to turn around. He was at the Derry camogie final against Ballinascreen.

“And he was helped up the field that day. I am still emotional thinking about it. Nothing was ever a problem or too much. He went and sold his car and bought a Hiace mini-bus so he could ferry youngsters to GAA games. He had a garage at the back of his house and put rooms in top and at Féile he would always have teams in there. He would go to the end of the earth to help out. I think this club doesn’t yet know what it has lost in Thomas. The game was a passion for him.”

Thomas’s daughter Aoife is captain of the camogie team and her two sisters Brona and Eilis also play on the team. He died just before the Ulster final: the players he had coached since childhood, beat Loughgiel after a replay, despite trailing by three points with five minutes to go.

Cassidy is a huge element of this season’s story for everyone in Slaughtneil: a vital force in what will go down as a unique achievement in the club game. Already, the GAA has come up with a contingency plan should both Slaughtneil teams make the St Patrick’s Day hurling and football showdowns. One of those matches will have to move.

As a club, Slaughtneil has been operating at full throttle for three years now. Since Mickey Moran came in, they have won three Derry titles, two Ulster championships and lost the 2014 All-Ireland football final to Corofin, the Galway giants. There has never been any tension between the hurling and football managements even though they share eight players.

“It is a balancing act,” says John Joe Kearney, who is on Moran’s management team. “But we have always got together after every big game and planned forward. There hasn’t been any great crisis, as such. Generally what happens is that when the dual players go to the hurling they are working on skill rather than fitness work. Not that we believe in running boys around a pitch with the football either.

“We play a lot of in-house games and play short, what we call murder ball games, in a tight area where you are tackling ferociously and using your ball handling skills. Nearly any drill we do is with ball in hand, which has been the policy since Mickey Moran came in. And his son Anton has come in and done a really good job as well.”

Kearney was on the Derry minor team that brought the first All-Ireland title into Derry in 1965. He played all grades for the county but work meant his energies were mostly concentrated on the club. They knew they were getting a vast reservoir of football know-how in Mickey Moran. But the impact has been dramatic.

You can take your pick of fierce football rivalries in south Derry. Chrissy McKaigue, the figurehead of the men’s team in both sports, said in a radio interview recently that the model Moran created will leave a lasting legacy. And the age profile promises a few more years of competing for major honours, which is bad news for their neighbours. Kearney has been surprised, though, by the reaction to Slaughtneil’s period of dominance.

“There’s always a club or two that will be envious but in fairness most clubs have been really good about lending their pitches to us when we’ve needed them.”

Slaughtneil started training for this season in February 2015 after giving the sides a month to rest up. “Practically every night we trained was dry overhead,” says Kearney. “We were thankful for that. It is tiring. In some respects we are going three years on the trot. The only thing is, it is easier done when you are winning. But I’m not 25 anymore and when you have miles on the clock it is harder.”

McKaigue has identified the exceptional discipline of the team as a key reason for their ability to remain fresh. After most big wins, they jumped in ice baths, ate and went home. The Ulster hurling win – they defeated Loughgiel by 2-14 to 1-13 – was marked with a night out but since then, they have simply been winning and preparing. Just over a month after the hurling final, they edged Kilcoo in the Ulster football final by 0-12 to 0-9.

Shane McGuigan, one of the side’s youngest players hit 0-5, three points from play. After that win, the celebrations were more measured. It probably helps that there is no bar in Slaughtneil anyway.

“We have our own club rooms,” says Seán McGuigan. “There is no bar or nothing but Patsy Bradley’s father runs a bar in Maghera and he can extend the licence out for a function if there’s a need for it. But it’s gone the next morning.”

Besides football and hurling excellence, this season requires extraordinary mental dexterity for Slaughtneil. They face Kerry bluebloods in Dr Crokes in the All-Ireland football final. Three years ago, they met Corofin with half a dozen players carrying aggravating little knocks that they had no choice but to ignore.

“Anyone who gets the chance of playing in Croke Park with a bit of a niggle, they aren’t going to let on,” says McGuigan. “But you will be found out on the day. And that is what happened. Corofin are a fine team and played well. Now, the two favourites were probably beaten last week in the semi-finals. So maybe it is a good thing that it is not Corofin because we might have been over-hyped to get revenge. Maybe it is better to take on a strange team.”

The players haven’t had much time to think about that yet. All energies this week will be directed at Cuala. Slaughtneil will go into the semi-final as outsiders and won’t care about that one way or the other. In some ways Slaughtneil, the marvel of this sporting winter, have already won no matter what happens for the rest of this season.

But try telling them that.