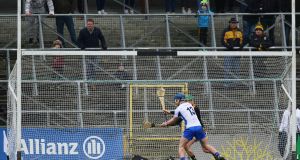 Waterford’s Patrick Curran scores a goal in their victory over Kilkenny in the Allianz League Division 1A clash at Nowlan Park, Kilkenny. Photograph: Inpho

Cork v Dublin, Páirc Uí Rinn, 7.0 (Live eir sport 1) – Dublin were unlucky to lose here in the championship but the teams look very differently positioned now. Admittedly Cork have put more into the early season and already have silverware plus a decent opening win in the league, last week against Clare. Shane Kingston and Luke Meade impressed up front whereas David Griffin, a rookie also acquitted himself well in the full-back line. Ger Cunningham’s deployment of youth has been more enforced by the walking away of some senior players and the progress of Cuala in the All-Ireland club. Still, they were very poor in Croke Park despite Tipperary’s traditional vulnerability in early season. Niall McMorrow was the only forward to make a serious impact and the team’s morale is bruised. Available evidence suggests only one outcome. Verdict: Cork

Laois v Offaly, O’Moore Park, 7.0 (Live eir sport 2) – Two chastened teams: the scale of Offaly’s defeat by Galway raised questions about the hierarchy in the division. Laois’s getting beaten by Kerry was less of a surprise and more of an emerging pattern but it could be that these are the bottom two teams for a reason. Laois had periods of superiority last week whereas Offaly disintegrated in the face of sustained attack. Eamonn Kelly also knowledge of Offaly and –one suspects – motive after last year’s involvement.   Verdict: Laois Division Three B Fermanagh v Warwickshire, Brewster Park, 2.30.

Ahascragh-Fohenagh (Galway) v Carrickshock (Kilkenny), Croke Park, 4.45 – Carrickshock are something of a mystery in that they had the look a few years ago of a club that could win a senior All-Ireland. Having bounced back from intermediate they’ll have to make do with this. The experienced big names, Richie Power, Michael Rice, John Dalton and John Tennyson are all pushing on but they have been effective so far and will have learned from the other semi-final to keep a close eye on Cathal Mannion. The Galway champions have a shot but Carrickshock look too well resourced. Verdict: Carrickshock

Mayfield (Cork) v Mooncoin (Kilkenny), Croke Park, 3.0 – The counties have amassed 11 of the 13 All-Irelands between them. Mooncoin are bidding to become the third successive Kilkenny club to win the title after Bennettsbridge and Thomastown and can achieve that against their northside Cork city rivals. Verdict: Mooncoin

Matches will be broadcast live on aib.ie/gaa and the AIB YouTube channel through Localstreaming.club.

UCD v St Mary’s, Connacht GAA Centre, 3.0 [Live TG4] –  On a semi-finals day of close-run things holders UCD just about made it, with UL nearly getting a goal at the death and will face initially unexpected opponents. St Mary’s haven’t been in the final since coach Paddy Tally’s team back in 1993. Their progress has been dramatic, inching out DCU in extra-time and on Friday pipping Billy Morgan’s UCC – who had two players sent off – in a thriller of a semi-final after the Cork side had scored two early goals. UCD with their host of well-known Dubs, Jack McCaffrey, Paul Mannion and Michael Fitzsimons, will be an inviting target for the Belfast college who have to go back to 1989 for their only win. Not short of recognisable talent themselves – Tyrone’s Cathal McShane, Conall McCann and Conor Meyler are all aboard – they will look forward to having a crack off the favourites. But UCD’s precarious semi-final win should leave them well dosed against complacency and back-to-back titles are on. Verdict: UCD

Our Lady’s Templemore v St Colman’s Fermoy, Limerick Gaelic Grounds, 2.0 – Further green shoots for Cork hurling as Colman’s, in pursuit of a 10th title, become the second school from the county to make the final in three years. A stiff task awaits though. Templemore haven’t won the Harty since 1978 but carry half the team that lost last year’s final against árdscoil Rís, including 2016 Tipp minor captain Brian McGrath from the famous Loughmore-Castleiney family. It promises to be a good contest but Templemore have the experience. Verdict: Our Lady’s Templemore

Clare v Kilkenny, Cusack Park (Deferred, TG4) – Under new management, Clare have taken a more relaxed approach to preparation for the league that they won last year and are getting back into the swing of things after an extended off season. On top of that they are implementing a more instinctive, less rigid game plan. Tony Kelly, the leading character in every team he lines out for, has gone to his club to prepare for St Patrick’s Day and in his absence it will be interesting to see how the team gets on. Cork were too lively for them last week but this promises to be a different challenge again. Kilkenny are casting around for new players and solutions to old problems. Waterford exposed their defensive frailties last week but the team, as ever, rallied and came within a point without truly convincing that they were unwrapping auxiliary assistance for Richie Hogan and TJ Reid, who again last week played very deep around centrefield. Clare will improve on the showing in Cork but Kilkenny even without first-choice players may be a more obvious choice given their hard-wired competitiveness. Verdict: Kilkenny

Waterford v Tipperary, Walsh Park (Live TG4) – Last July there were a good few takers for the view that Waterford’s time had come but a chastening afternoon at the Gaelic Grounds luridly put paid to that and manager Derek McGrath has been at pains during the week to emphasise that Tipp are a few years ahead of his fledgling team in terms of practice and physical maturity. Watching Waterford lay about Kilkenny last week however they appear to be addressing any physical deficits. Tipperary had a stress-free run-out at Croke Park but compared to last year, looked in sharper form for the spring campaign. Aidan McCormack was a new face with a good eye for scores and captain Pádraic Maher was in commanding form. Waterford are unduly affected by the Fitzgibbon with around a dozen players involved this month but they were maybe as a result combative and competitive in Nowlan Park. The visitors will be keen to send out a message that this time they’re not going to go merry making after an All-Ireland win whereas the hosts want to put the memory of last summer behind them. Both can hit their targets. But. Verdict: Tipperary

Galway v Wexford, Pearse Stadium – Wexford have been forced to hit the ground running in David Fitzgerald’s first campaign in charge. So far so good and the defeat of Limerick sends the visitors west, knowing that a despite only one match having been played a win will almost certainly promote them with Laois, Offaly and Kerry to come. That’s unlikely though, No matter how impressive last week was, Wexford know that Galway are merely slumming it in this division and want to get out. Their ransacking of Tullamore last week was a sign that they won’t be squeamish about their ambitions. A resilient display by Wexford will be encouraging but the points aren’t likely to be going anywhere in a hurry. Verdict: Galway

Limerick v Kerry, Gaelic Grounds – Limerick’s frustrating defeat puts them on the promotion back foot almost immediately and they will be keen to maximise the points from now to the last day when they hope to have something to play for when Galway visit. Kerry – like their hosts – are getting used to the division but this a steep learning curve. Verdict: Limerick

Westport (Mayo) v St Colmcilles (Meath), Croke Park, 3.45 – Two of Meath’s great 1980s team, Robbie O’Malley and Bernard Flynn, played for Colmcilles in their day and the current team feature All Star nominee Graham Reilly and former Munster rugby international Niall Ronan. They upset Pomeroy in the semi-final and face the underdogs from the other side of the draw, Westport, who calmly first caught and then out-lasted Kenmare in extra time. Lee Keegan could become the first Footballer of the Year to add an All-Ireland club medal the following spring. Chances are that he will. Verdict: Westport

Glenbeigh-Glencar (Kerry) v Rock (Tyrone), Croke Park, 2.0 – Darran O’Sullivan was in fine scoring form for the Kerry champions and gets a great opportunity finally to beat a Tyrone team in an All-Ireland final having suffered a couple of defeats at county level. They need to keep an eye on Aidan McGarrity but have the overall edge. Verdict: Glenbeigh-Glencar

Matches will be broadcast live on aib.ie/gaa and the AIB YouTube channel through Localstreaming.club.