IT Carlow into Fitzgibbon Cup last four after UL upset 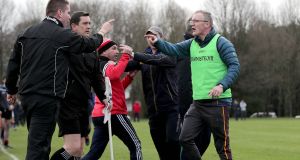 Management from both sides, including Brian Lohan from UL and DJ Carey from IT Carlow get involved on the sidelines. Photograph: Morgan Treacy/Inpho

IT Carlow pulled off an upset as they sent one of this year’s Fitzgibbon Cup favourites, University of Limerick, out of the competition after their quarter-final clash at the UL Grounds.

Kilkenny’s Chris Bolger was the hero for the Carlow students as he scored his side’s decisive fourth goal in the 58th minute.

In an often heated affair sparks flew on the sideline also, with managers Brian Lohan and Michael Dempsey exchanging words, as Carlow coach DJ Carey tried to calm things down.

University of Limerick started well and opened up a three point lead after five minutes, but the visitors soon settled with two quick fire goals in the space of three minutes through Martin Kavanagh and Mark Russell.

It got even better for IT Carlow when a third goal in the opening 10 minutes arrived through Jack Fagan - giving the visitors a 3-3 to 0-5 lead.

John McGrath, who scored nine points overall, and former Hurler of the Year Tony Kelly kept UL in touch but they still trailed at the break 3-7 to 0-12.

Russell extended the lead for Carlow after the break but three points on the spin, including a brace from McGrath, to leave just three points between the sides.

Carlow were clinging on, but UL’s pressure finally caught up on them when four more UL points on the bounce had the sides level with eight minutes left to play.

Carlow though responded, and Bolger’s late goal halted the UL momentum and ultimately proved the difference.