Croke Park beckons for Glenbeigh-Glencar and The Rock 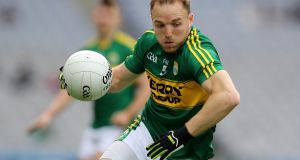 Darren O’Sullivan: the Kerry star will spearhead Glenbeigh-Glencar’s bid for the All-Irlenad Junior title against Tyrone side The Rock. Photograph: Ryan Byrne/Inpho

Neighbours may be defined by distance, but no distance can keep rivals apart, especially when it comes to Kerry and Tyrone.

Sunday’s All-Ireland junior club final in Croke Park is the latest incarnation of their modern football rivalry with a plot line worthy of their mutual hunger to beat one another.

Neither Glenbeigh-Glencar nor The Rock have won this title before, and both teams will come from opposite ends of the country feeling their time has come. True to the Kerry-Tyrone rivalry, the only thought worse than losing is the thought of losing to the other.

Kerry champions Glenbeigh-Glencar have never actually progressed beyond their county before, yet come suitably ambitious and armed with intent having seen Kerry clubs Templenoe (last year) and Brosna (in 2015) win the last two All-Ireland junior championships. A win on Sunday would therefore make them the third successive Kerry club to land the title.

“Templenoe beat us in the final in Kerry last year, and Brosna beat us the year before, in the semi-final,” says club secretary Peter O’Sullivan, who is also part of the management team led by Aidan O’Shea, son of Kerry legend, Jack.

“And we lost a final as well the year before that, to Keel. So the last three years in Kerry we’d lost two finals and a semi-final. So we would have been close, the last six or seven years in Kerry, losing finals or semi-finals by a point or two, against a couple of tough teams.

“And for a few of those years it seemed whichever team did win in Kerry went on to win the All-Ireland. So I suppose traditionally the Kerry teams would be strong coming out.”

Four-time All-Ireland winner for Kerry Darran O’Sullivan has been playing a suitably starring role in helping them get this far, scoring a wonder goal in their semi-final win over Mayo junior champions Louisburgh. But the 4-14 to 0-13 scoreline was not quite as comfortable as it looks.

The Rock made it to the final once before, losing in 2008 to Cork’s Canovee, and also lost the 2015 semi-final to Kerry’s Brosna. They also boast an All-Ireland winner of their own in Tyrone’s Ciarán Gourley, and O’Sullivan is under no illusions about the scale of the task which awaits them on Sunday.

“Even without the Kerry-Tyrone thing, it’s not just the rivalry, because there’s never much between Kerry and Tyrone football. And I think structurally the Tyrone league and championship would be similar to our own, and would be strong. They’ve been coming for a while too, lost the semi-final to Brosna a couple of years ago.”

The club may be small in size, yet Glenbeigh-Glencar have no shortage of talent, also boasting Caolim Teahan, one of the standout player on the Kerry minor All-Ireland winning teams last year, with Kieran Courtney also hitting 2-3 against Louisburgh.

“We’d have a panel of 30, 31 players,” says O’Sullivan, “and we play Division One league football in Kerry as well, the last two years, which is very strong. That’s probably what got us over the line this year, playing the likes of Dr Crokes and Austin Stacks in league football. We’d actually be the highest-ranked junior team in Kerry. We just couldn’t win the competition. Kerry was just so hard to get out of, the junior championship is so hard to win. But that league football I think stood to us.”

O’Sullivan is very enthusiastic about the competition and its Croke Park climax, introduced in 2004 by Kerry’s former GAA president Sean Kelly as a way of inspiring junior clubs. O’Sullivan has no doubt it’s done exactly that.

“It’s been huge, and I think it’s what so many junior clubs aspire to, especially down here. For ourselves and The Rock, the chance to play in Croke Park is huge, and the buzz around Glenbeigh the last few weeks, you’d have to see it to believe it. It’s all about getting up to Croke Park by bus, train, you name it. I’ve relations coming home from America just for the game. It’s a once in a lifetime opportunity really, to get people from the area back together.

“The county final was the big aim, and every game after that has been a bonus. So to get to Croke Park has been a great journey, so far, for sure.”

1 Betting shops face uncertain future as they prepare for Monday reopening
2 Tianna Bartoletta: ‘After you’ve gotten your medal, you become black in America again’
3 Mature Ringrose keeping the ups and downs of rugby life in perspective
4 Ian O’Riordan: An education in race and running during college days in America
5 How a GAA club sprang up in east Belfast over Sunday breakfast
Real news has value SUBSCRIBE