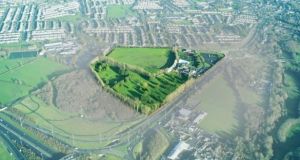 The Spawell site comprises just under 35 acres and located within 700 metres of the J11 exit on the M50.

The much anticipated deal between Dublin GAA and the Davy Group for the purchase of the Spawell complex in Templeogue looks to be finally heading for conclusion by the beginning of March.

Whereas speculation last month that an agreement was about to be announced proved slightly premature, it is understood that the formalities will concluded shortly.

Contrary to other speculation, it is also understood that the development of a 25,000-capacity stadium on the site is not a current priority and the plan will be to develop a centre of excellence with a number of pitches, including a small-scale spectator arena with room for around 2,500, suitable for under-age matches and Sigerson or Fitzgibbon Cup fixtures.

Finalising the project will be the culmination of nearly two years of activity, going back to mid-2015 when speaking to this newspaper in June of that year, Dublin CEO John Costello was critical of Nama, which appointed the receivers who decided not to sell the property to the GAA and took a higher offer from Davy.

Citing the obligation to take highest price in a sealed-bid process, which has been endorsed in the courts, the agency argued that the receivers Grant Thornton had no discretion in the matter. Costello said that community development was supposed to be a consideration when disposing of Nama assets.

“They’re on target to realise profits of more than a billion and I think they’re being disingenuous using the argument about the receiver because they were the ones who appointed the receiver in the first place,” said Costello.

“When the legislation went through the Dáil at committee stage the ‘community development’ provision was added but I can’t find any example of this being taken into account.”

Late last year it emerged that the deal was back in play. Dublin GAA had been originally outbid by around €500,000 with Davy paying €9,000,000 for the property but the successful bidders, who acquired the complex (which included a par-three golf course, driving range, squash courts and 12 commercial units as well as planning permission for a 149-room hotel) as part of an investment portfolio, had a change of mind and commenced talks about making it available at a small premium.

“The true worth of local amenity infrastructure projects cannot be measured on balance sheets alone,” he wrote. “This needs to be recognised by those making decisions.  You cannot easily measure the benefits such amenities bring. You cannot measure the real and add-on value they give to communities – particularly the benefits to mental and physical health.

“So in instances, such as the aforementioned Spawell Complex, where the State is selling off assets, I firmly believe the social impact should be considered.  If the asking price is being met, surely a potential project for the benefit of the local community should be given some weight.

“Surely this is of greater value to the taxpayer – because our communities are full of taxpayers.  And there is nothing better for a taxpayer than to see a tangible benefit from their taxes.”

The Spawell site is just under 35 acres and located within 700 metres of the J11 exit on the M50.

Plans are for training facilities similar to the GAA’s national centre opened last year in Abbotstown, four pitches, including one sand-based and with floodlights which will be fitted with spectator facilities and will relieve pressure on Crumlin’s O’Toole Park. It will not be used for major inter-county matches.

Speculation about a possible stadium was natural given the Dublin strategic plan, published in 2011, includes the ambition to “develop a stadium to bridge the gap between the capacity of Parnell Park and the 82,300 capacity of Croke Park to meet the needs of Dublin and its population”.

Whereas Croke Park, which is currently used for Dublin’s home football matches in the league, isn’t ideal for the crowds involved given its large spare capacity, it is viewed by the county administration as a perfectly adequate option for matches that would draw crowds too large for Parnell Park, which will remain Dublin’s main GAA centre on the north side of the city.

The cost of building a 25,000-capacity stadium is reckoned to be in the region of €40,000,000, which the county and the GAA nationally consider unnecessary expenditure for the foreseeable future.

At Croke Park level there is support for the project, as there was for a previous plan to construct a similar centre in Rathcoole, which ran into difficulties after the site had been purchased because of the costs involved in building a road to service the location.