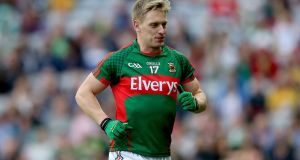 Mayo’s Kevin Keane will line out for Westport in Croke Park this weekend. Photograph: James Crombie/Inpho

I know that people in glass houses shouldn’t throw stones, but I have a cousin who might love sport not wisely, but too well. Maybe it takes one to know one, but there have been times when I have started to question the man’s sanity.

For instance, there was an evening spent in a hostelry in Galway City, where we were enjoying an early-evening drink. In the middle of polite conversation, he out of nowhere began emitting a stream of foul-mouthed invective. I turned around to see that he had caught a glimpse of something he didn’t like on Sky Sports News – it was Rafael Nadal celebrating an early round win in the Madrid Open.

I presumed the only possible reason for the ferocity of his reaction was monetary, that he had inexplicably bet against Nadal, then in his pomp . . . but he subsequently told me he had taped the match, with the intention of watching it the following morning.

To have an interest in the result of a game of this nature is not necessarily a sign of madness. But to commit to watching two whole hours of it, 12 hours after the event, to discover the result? To paraphrase United States Supreme Court Justice Potter Stewart, I don’t know what loving sport too much is, but I know it when I see it, and this would appear to have been an open-and-shut case.

The latest symptom displayed was travelling three hours on a bus to Sligo to play Steve Davis in a game of pool. This is, in some ways, understandable. Meeting one of your heroes is often a thrill, and the chance to pit your talents against them is seductive.

Of course, in a situation like an exhibition pool game, it’s a parody of a sporting contest, and everyone knows it. But when he sent me on the video of the frame (yes, obviously, he sent me on a video of the frame) there’s a moment when it appears as if he has a chance of beating Steve Davis. And as he told me about it, you could see him tense up.

This is an idea with which GAA folk have a little more experience. This weekend, Graham Reilly and Lee Keegan will go head to head in the All-Ireland intermediate club final in Croke Park on Sunday afternoon. But that clash is not what really interests me – it’s the fact that Kevin Keane, and 27 intermediate club footballers from Westport and St Colmcilles will be on the field with them.

Before that game kicks off, Glenbeigh/Glencar of Kerry play Rock Saint Patrick’s from Tyrone. In their semi-final win over Louisburgh in Ennis a couple of weeks ago, Darran O’Sullivan got a goal for Glenbeigh/Glencar which was an outrageous piece of individual brilliance. He picked up the ball on the 50-yard line, beat three men, and then his lightning pace took him away from the cover before he blasted the ball emphatically to the top of the net.

It duly flashed around the internet that evening, and there were some who bemoaned the quality of the defending, a complaint which managed the feat of being both technically correct, and spiritually all wrong, at the same time.

Too little, too late

There is a player in a covering position, nominally a sweeper I suppose, whose attempt to get into position to make a tackle is the dictionary definition of “too little, too late” but this is the simple magic of it all. Why on earth would we expect that fella to get across to stop O’Sullivan?

He is meeting his Steve Davis, only this time Davis is playing for keeps. It might be more painful, but it’s an altogether more real, more authentic sporting contest. Gaelic games give all of us a chance to measure ourselves against our heroes. But this isn’t a pro-am, it’s for real.

There will come a moment on Sunday when Darran O’Sullivan will wheel past his man, put his head down and go for goal. And in that moment, three or four junior footballers will have the chance to go toe-to-toe in the ring with Carl Frampton, or stand on the 16th tee at Augusta with Jordan Spieth. One will have the chance to pull him down and take his black card. Another might be in a position to shoulder him off the ball. And in the end, there will be a goalkeeper checking his angles and advancing on the shot.

Quite apart from playing in Croke Park, that in itself is an extraordinary gift that the sport has given those players. If you haven’t ever been to the junior and intermediate finals in Croke Park, they are as good a day as you can have following Gaelic games.

This Saturday and Sunday, you’ll be able to watch Pádraig and Cathal Mannion, Michael Rice, John Tennyson, Richie and John Power, as well as the aforementioned footballers . . . and, of course, 110 or more club players tilting at those windmills.