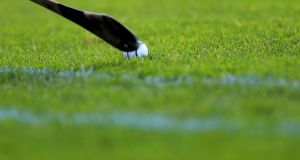 CBS Kilkenny are into the Leinster Senior A hurling final. Photograph: Inpho

It’s going to be an all-county affair in this year’s Leinster Schools ‘A’ senior hurling final after Kilkenny CBS held off a strong Good Counsel College challenge on Tuesday afternoon.

When CBS And Good Counsel met on Saturday last, it was CBS who were leading 2-5 to 0-3 when the game was abandoned four minutes into the second half as the result of an injury to a Counsel player.

But on this occasion they came up against far more stern opposition from the Wexford college.

Very little separated the sides during the opening 30 minutes, with a Sean Bolger goal for CBS midway through the half sending the sides in level at the interval, 1-3 to 0-6.

Through the 60 minutes the sides were level on eight occasions, with the accuracy of Good Counsel freetaker Luke Sinnott keeping his side in the contest.

However Conor Drennan’s 56th minute goal gave his team a 2-8 to 0-10 cushion from which they seen out the victory.

1 Colin Kaepernick’s exile is too fresh for NFL to speak out on US protests
2 Ken Early: Why international football is fading into obscurity
3 ‘A radical departure’: Who are CVC and what are their plans for rugby?
4 IRFU plan gives club rugby hope of return to action this year
5 All in the Game: Nigeria bite back in war of words with Redknapp
Real news has value SUBSCRIBE