GAA injuries similar to those in traffic collisions, says surgeon 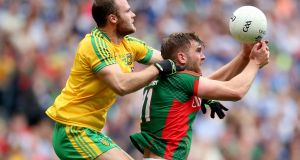 Neil McGee: was injured after colliding with Donegal goalkeeper Paul Durcan during the 2015 All-Ireland quarter-final against Mayo at Croke Park. Photograph: James Crombie/Inpho

One of Donegal’s top surgeons has said injuries sustained in high-impact collisions on the GAA field are now similar to those sustained in a road traffic accident.

Dr Kevin Moran, Donegal’s team doctor, said intercounty footballers are getting bigger and stronger and, as a result, the GAA is now seeing collision injuries that you would associate with rugby.

In a wide-ranging interview, Dr Moran noted that 95 per cent of the cases of concussion and other serious injury on the sports field occur when there is no doctor present.

Dr Moran said it was also necessary to be aware that other collision injuries, if undetected, can have equally catastrophic results – like chest and abdominal injuries.

He cited examples of injuries suffered by two prominent Donegal players – All-Ireland-winning captain Michael Murphy and full back Neil McGee – in the recent past.

Paul Durcan collided with Neil McGee in mid-air just before half-time during the All-Ireland quarter-final against Mayo in 2015.

Dr Moran examined McGee in the dressing room at half-time. He had extensive bruising to the rib cage and chest wall and was in significant pain, but as his chest was clear and the player was adamant that he wanted to return to play, Dr Moran agreed to his request.

“I must say at this point that Neil is one of the hardest men in football, both physically and psychologically, and he has an incredible pain barrier – but as soon as he sprinted for the first ball he became breathless and that concerned me as I couldn’t exclude a collapsed lung so I took him off immediately,” he said.

During last year’s All-Ireland quarter final against Dublin in Croke Park, team captain Michael Murphy was blind-sided by his team-mate Kieran Gillespie resulting in an impact to his chest wall and left flank.

“My main concern though was that he had either a kidney or spleen injury because such injuries cause similar muscle spasm making assessment difficulty, even for me as a surgeon who has operated on a number of such injuries over the past 25 years not infrequently unfortunately because of the road carnage in Donegal.

“Eventually, I was happy that Michael was okay and that there was no deep cavity injury to his chest,” Dr Moran said.

He stressed that the GAA is very proactive and, at all times, is only interested in the welfare of the player.

“What we can’t overemphasise enough is that in 95 per cent of the cases of concussion and other serious injury there isn’t a doctor present and, in the absence of a trained professional, the referee is the one constant.

“They’re the great untapped resource within the GAA when it comes to concussion. They’re in a position to make clear, impartial, judgements and with training their role could be expanded to resemble their counterparts in Rugby Union.

“Having recently addressed the intercounty referees in Croke Park and listened to their concerns, I believe they should have the power to remove a player from the field of play if they have concerns about their welfare, particularly in the absence of a trained professional,” added Dr Moran.

“As things stands it’s imperative that the manager or the coach, or whoever is responsible must remove a player from the field of play if concussion is suspected. This is particularly important for underage or female players, due to the risk of second impact syndrome, which is almost inevitably fatal.

“Thankfully we haven’t experienced that yet in the GAA. It’s a very, very rare occurrence but when it does happen it’s devastating because there’s no treatment for it. That’s it. It’s irreversible,” he said.

“The take home message is that concussion is something to be respected, not feared. It can be treated and if managed properly and the player is taken off immediately and rehabilitated appropriately then the evidence suggests that the player will not have an increased risks of picking up another concussion or suffer long term damage.”

“In contrast to a possible concussion where I believe you should make your decision on the pitch and stick by it, you should be able to take other players off to assess their injuries in a medical room before re introducing them, if appropriate,” he said.

Games involving the top eight county teams are all televised nowadays which places increasing pressure on team doctors raising the possibility of trial by media and subsequent litigation.

“As an organisation the GAA is very proactive and is only interested in the welfare of the player,” Dr Moran said.

Last year, Lee Keegan was concussed during a collision with Eoin Cadogan on the opening weekend of the National Football League, the consensus is that the player should have been substituted immediately rather than being allowed to remain on the field.

“The challenge for the team doctor is to decide if it’s safe to leave a player on the field of play and there’s a four-part process in helping us make that decision – knowing the players history, being able to see the impact in real time, carrying out a focused examination of the player on the field of play and, finally, observing the player’s progress if it is deemed they are fit enough to be allowed to play on,” he said.

He stressed it was also necessary to be aware that other collision injuries, if undetected, can have equally catastrophic results – like chest and abdominal injuries.