Referees working hard to be ready for thankless job 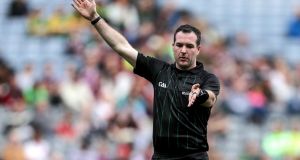 Monaghan referee Martin McNally is excited to be involved in the 2020 football championship. File photograph: Inpho

The man or woman in the middle of games is by in large, the most essential facet of any sporting event. Often overlooked when things go well and often critiqued for making a call that could possibly turn the game, sure who would want to be a referee?

It is a thankless job, but one where those involved have great pride and take immense pleasure in doing an almost undesirable yet fantastic job.

Martin McNally, an inter-county referee from Monaghan, is one of those leading the pack despite being relatively young for a referee. But like the rest of us, the past few months have been very challenging for him:

“I suppose the first lockdown back at the start of March, it’s really bizarre because back in February, March I refereed Kerry and Mayo in the National League and I suppose I was riding the crest of a wave with regards my refereeing and my trajectory. I was due to do a line in a National League game between Tyrone and Donegal in Ballybofey in the next round. Then everything was put on hold, really,” he explains.

To an outsider, a referee literally runs around and makes decisions that they hope won’t affect a game too much, but to passionate fans, a large chunk of their team’s success hinges on the man in the middle. What few realise is just how much goes on in the background to maintain the required level of fitness. Especially without inter-county competition for so long:

“What I found myself doing was number one, looking after my own personal fitness. Going for runs, doing my own training. I love cycling, and it didn’t cost me a thought to hop on the bike, especially in the longer evenings during the summer to go on a 30, 40, 50km cycle. Just for the exercise, just to clear the head and everything else.

“I think it was maybe at the end of May beginning of June that we were told that yes we’re actually going to have club football and I suppose that gave us something to work towards.”

Donal Smyth, the GAA’s national match officials manager, reached out and put a plan in place, ensuring all referees, not just inter-county referees, were safe, had an excellent base to work off for physical fitness and also to make sure the new rules that were put in place at the start of this year were still fresh in referees’ minds.

I am in a position, and all of my colleagues are in a very privileged position

“Most of the training was I suppose about mentally preparing for the games and to make sure that we were sharp going into our club games because we had a layoff of six, seven months where we hadn’t blown the whistle at all,” explains McNally. “You can go out, and everybody can work on fitness and everything else, but it’s match sharpness, match smartness that we needed to make sure that we were fully up-to-date”.

The club games went by relatively unscathed, bar five finals left to be played. Next, for inter-county referees was the dreaded beep test. That’s where DCU PhD student Aidan Brady comes in. While referees have been working on their fitness with Professor Niall Moyna in DCU, Brady’s PhD, funded by the GAA and Irish Research Council, is about trying to understand what physical and physiological demands referees are exposed to during games.

The measurement is simple: 16.8 in the beep test and a referee is allowed to officiate a national league game. If you hit or exceed 17.4, a referee can continue his refereeing career well into championship. To put it into a professional context, a Premier League referee hits about 17.8 on the beep test.

Brady’s research goes far beyond the beep test, he also takes a series of tests at half-time and after games. “The blood test that we take is what’s called blood lactate,” he tells The Irish Times. “Basically, what happens is, the more intense the game, the higher those levels are in the blood. Sometimes you won’t always see that based on GPS or heart rate, so it just gives us another metric to look at. The more intense the game, the higher the levels we would expect to see.

“Another one that we take is what’s called RPE, or a Rating of Perceived Exertion. It’s basically a subjective measure, where the referee will be asked at half-time and at the end of the game to give a rating between one and 10 on how hard they feel that they were working. That’s quite interesting in the sense that we try to say to them: ‘Only rank it based on how physically demanding you felt in terms of the running demands, don’t take into account the mental demands in terms of decisions or calls, was it intense? Was there a lot of pressure?’ We found that subjectively, referees are quite good at knowing how physically demanding the games actually were.”

The big one though is the GPS. “When you compare things like the first-half or the first 15 minutes of a game, versus the last 15 minutes of a game, independent of what the GPS might be showing in terms of how far they’re travelling or how fast they have to run, heart rate can give you a different idea as to how hard that individual is actually having to work. We sometimes call GPS the external load, the heart rate is the internal load.”

Brady points out something rather unusual during our chat. While we, as fans in the stand, tend to get incredibly overworked by the goings-on in the field, referees tend to remain steadily calm when making big decisions. For example, in the All-Ireland hurling final, while James Owens was sending off Richie Power for a high tackle, his heart rate actually decreased in what can only be described as a highly stressful situation.

For Brady, the physical fitness needed by an inter-county referee can only be summed up in one way.

“I think if there’s one thing we’ve seen is that refereeing is far more physically demanding than what I think anybody would have said. They’ve got to be responsive to what happens during a game. It’s not like, for example, going out doing a 5k. You’ve got to be able to be responsive. Say there’s a hit 40, 50 meters of the pitch, a referee immediately has to turn and sprint and catch up with that. They can’t pick and choose when that happens.

“They can’t say, ‘Okay, I’m going to take 90 seconds break now and then go’. They have to be ready whenever it happens. Then, in the midst of that, if there’s a foul, they have to be aware of that as well. It’s a very physically demanding and also mentally demanding role because to not only have to keep up with the play but also then to have to make what are very tough decisions in critical games to a lot of people around the country.”

However, if you ask McNally about his mindset going into an incredibly demanding season that has taken its toll mentally and physically, he beams with delight and pride. “I am in a position, and all of my colleagues are in a very privileged position to be going outside of 5km zone, which everybody else has to stay in, to be part of something special and, hopefully, be facilitators and bring in entertaining spectacles and events into the TVs in people’s homes.”