Kerry cruise to Division 1 title – now for the bigger business 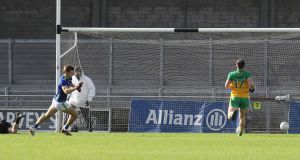 The league is won with a whimper. Kerry didn’t have to overly exert themselves in putting away a Donegal team that had come down the road without Michael Murphy, Ryan McHugh, Neil McGee or Patrick McBrearty. Tony Brosnan starred in attack, Sean O’Shea backed him up and when it was all done, Kerry had their 21st National League tucked away, their first since 2017.

Once Donegal made it clear that they were more interested in Tyrone next Sunday, Kerry had no real trouble in taking care of business. The particulars of this one were sorted out in the 20 minutes after the first-half water break. The game up until then had been a knotty, wintry affair, full of slow build-up against heavily manned ramparts on either side. Donegal can play that kind of game blindfolded and so even in their weakened state it was no great shock to see them go to the water break 0-3 to 0-2 ahead.

That was as good as it got for the visitors though. Kerry rocketed out of the water break and sucked all mystery from the afternoon in the space of 10 minutes. Raiding corner-back Tom O’Sullivan started insinuating himself into the Kerry attack and after playing a one-two with David Clifford he picked a De Bruyne pass in behind the Donegal cover to put Seán O’Shea in on goal. It was a pass that deserved a green flag and O’Shea duly obliged.

A minute later, O’Sullivan was put away himself, sent through by a lovely Tony Brosnan ball to leave him one-on-one with Shaun Patton. His attempt to emulate O’Shea wasn’t as successful though and he blazed his shot over, leaving Kerry 1-3 to 0-3 ahead.

Kerry were relentless now. Gavin White, the wing-back who has returned from the break as their standout performer, blazed through for a goal of his own in more or less the next breath. Collecting near the sideline on the Donegal 45, White rode three tackles and pinged a low shot past Patton from 20 metres out. On a grey afternoon, it was a goal stolen from summer.

Donegal had no real way back after that. They might have had the stomach for a tight game if that’s how it had played out. But with Tyrone on the horizon and their main men 400km away, a six-point margin was realistically more likely to lengthen than shorten from there on out.

And so it proved. Brosnan was in ruthless, economical form in the Kerry full-forward line, ticking along with scores without having to expend a lot of effort. He fisted a point when a goal was on after Clifford put him away on 25 minutes and tidied up another from a poor Patton kick-out immediately after. By half-time, Kerry were 2-9 to 0-8 ahead.

A couple of aspects of that total would have seriously pleased Peter Keane. For one thing, Kerry compiled it while playing against the breeze. But just as pertinent was the fact that they put it together without leaning on David Clifford. The young magician only contributed a point in that first half - and it was an injury-time free. He was involved in plenty of link-up play but in general, Donegal corner-back did well. Not for the first time, either.

The second half was an accounting exercise, in all truth. Kerry had the game won and showed very little interest in turning in a vulgar scoreline. Brosnan continued his fine afternoon, nailing a point from play and another from a mark either side of the water break. Clifford started stretching his legs as well and tacked on four points from play, two of them laid on by Brosnan.

In reply, Donegal only managed a couple of points in the whole of the second half. Both sides have bigger battles ahead and, they hope, a longer winter. Kerry bag the first trophy of the year. In this fettle, they’ll go very close to the big one.