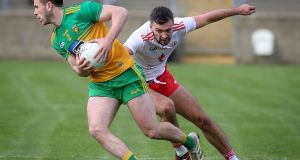 Tyrone’s Conor McKenna in action against Donegal during the recent league clash between the sides. Photograph: Lorcan Doherty/Inpho

In the space of two games Conor McKenna has become the fulcrum of Tyrone’s attack, scoring or directly assisting 5-10 of 5-27 since his return to Gaelic football. From play and marks alone, he is responsible for converting or giving the final pass for 61 per cent of Tyrone's scores. A goal machine and a pass master, the challenge for Tyrone is how they can best exploit both attributes as the Ulster championship’s blanket defences await.

Before leaving Irish shores for a successful six year stint in the AFL, McKenna had lit up the 2013 All-Ireland minor championship, scoring 3-11 in four matches, from the Ulster final to his team’s All-Ireland final defeat to Mayo.

He was explosive, he could carry, score off both feet, catch and decide matches with individual moments of brilliance. Seven years later and he’s walked back into the Tyrone senior team, doing the exact same thing.

After announcing his retirement from the AFL in September, McKenna made his Tyrone league debut in the four-point defeat to Donegal before again lining out in the number 11 jersey for last weekend’s one-point win against Mayo. In those two matches he scored 3-4 and directly assisted – by either giving the final pass or winning the converted free/penalty – for a further 2-6 which combined accounts for 57 per cent of Tyrone’s scoring total.

So that’s three goals scored, two more created, and another save forced in just two matches. He’s been involved in three goal chances per game. Against a possession-based team like Donegal on Sunday, who held the ball for long stretches of their league meeting, Tyrone will need to take risks in attack and they’ll likely need goals to get over the line.

Tyrone’s dilemma then, is that their biggest scoring threat and their playmaker are the same person.

Since football resumed against Donegal, Darragh Canavan has 1-1, while Darren McCurry, Peter Harte and Mattie Donnelly have 0-3 each from play/marks. McKenna has 3-3. But in his two matches, he has also completed five passes for attacking marks within a total of 13 kick passes. He’s directly assisted 1-4 with his feet alone.

Last year Tyrone built their attack around converted full-forward Cathal McShane who top-scored in the 2019 championship with 3-49 but this winter he misses out with injury. Many are now expecting Mickey Harte to position McKenna similarly, leaving him close to goal as part of a two-man or sometimes one -man full forward line.

Against Donegal this was often the case, however McKenna broke out the field to make five kick passes over the 70 minutes. A scoring chance arose from four of those passes, one being a converted mark, and two others leading to a point indirectly.

Against Mayo, McKenna rotated into the inside line, but more often than not he was positioned between the Mayo D and halfway. Here he kicked eight passes, six of which led to scoring chances. Tyrone converted 1-4 from those opportunities, 1-3 of which McKenna directly assisted.

Operating in the pockets between Tyrone’s inside forwards and their defensive transition allows McKenna to influence the game with his passing, but also to ghost back inside for scores or to present an option for a long ball.

Over the years Tyrone’s attack has lacked creativity and purpose once their transition is held up, McKenna adds both. But, when he is deployed inside from the start, he’s usually only able to float out in time to join the second or third phase of an attack, thus limiting his options for a kick pass.

The other benefit to having the 24-year-old operating closer to number 11 than 14 is his importance under the Tyrone kickout. Niall Morgan’s long kickout can be a serious weapon, but Tyrone retained just over 60 per cent of their own restarts against Donegal and Mayo combined. Against Donegal they won just 10 of 19, but in Castlebar, Morgan had McKenna manning the 11 position and he targeted him on 11 occasions. Tyrone came away with possession from 10 of those instances.

The Eglish club man caught one fantastic mark, as well as marking one of David Clarke’s underhit kickouts. Morgan is more than capable of reaching his half forward line – or as he showed against Mayo when the elements were behind him, he can even go beyond it – and he will need to against a towering Donegal middle sector.

The former Essendon man does his bit defensively too. From only four tackles against Mayo and Donegal, he made three big turnovers. He reads the play like a veteran and is efficient on and off the ball.

The cheetah in Tyrone’s attack, he breezes around the field with minimum energy exerted, but his power plays, whether taking the ball on the loop inside or exploding on to possession on the 65, are equally deadly.

Keeping him close to goal for the kill may be appealing but Tyrone need to use his creative instincts too to beat Donegal. Striking the balance between inside and out will be decisive.