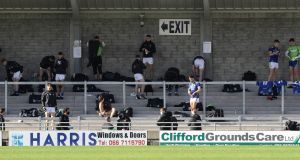 Kerry players get ready ahead of their clash with Donegal in Tralee. Photograph: Lorraine O’Sullivan/Inpho

It looks like the GAA’s unhappy lot to have wider divisions calcifying around the unique circumstances of the 2020 All-Ireland senior championships.

The wider complexity of how best to tackle the coronavirus pandemic hasn’t prevented plenty of black and white stances on the matter. So tinges of grey are rare in reaction to the government allowing senior hurling and football go ahead in a lockdown.

Perhaps depending on your stance on bigger life-livelihood debates, this is either madness or a glorious gesture of defiance. Only time will ultimately tell who’s right. But one sure thing is that the GAA is a hostage to fortune over it.

That’s because logically it is an absurd move to make when people are both literally and economically fighting for survival.

With much of the country ground to a halt, and a population huddled in lockdown, it has been effectively decided that an amateur recreational activity is an essential service.

The fight against Covid-19 rules out playing golf alone around 200 acres of parkland. But the senior intercounty circus can traverse the country playing contact sport at a time of existential crisis. Good luck explaining that to anyone without skin in the game.

That the participants will return to their families and communities means there is a difference to the ‘bubble’ environment in which professional activities such as rugby and soccer take place.

Neither is there the economic argument that underpins racing being able to continue behind closed doors. Thousands of jobs are tied up in keeping that going, not to mention there are animal welfare issues. Thoroughbreds don’t do lockdown.

The GAA has done lockdown already. The summer was without the championships that are central to the Irish sports calendar. During it the association threw various shapes at Nphet but also underlined its unique voluntary status by often playing a blinder on the ground.

Now the highest levels of Government have agreed with the GAA that the country’s morale requires top-flight senior action to take place no matter what.

There have been assurances from many quarters about the importance of this to the nation’s spirits and how being able to watch games on TV will provide a vital boost to so many people during a bleak winter.

The gamble being taken underlines again the singular status of our home-grown games. But it is a gamble

That some of the pleading has been overwrought and at times self-serving doesn’t make it redundant.

Misty-eyed allusions to the GAA’s special place in the Irish soul don’t stack up well against the stark practical realities of infection rates. Neither are they productive in really explaining just how important these games are to so many people.

Quantifying that importance like an ‘R’ number is impossible. But the mental wellbeing tied up it isn’t some superfluous issue either.

In fact, since no overwhelming employment or economic arguments exist for senior GAA games being a special case, it can be argued there is rare and admirable altruistic element involved, although one that might be even more convincing if games weren’t parked behind a pay-wall.

The gamble being taken underlines again the singular status of our home-grown games. But it is a gamble. And even though results dictate if such speculation is inspired or dense it is reasonable to wonder if this isn’t the GAA sticking its neck out too far. Because it will get chopped if it goes wrong.

Reaction to the celebratory scenes that followed a number of county club final games was visceral. The association got forced into fire-fighting and making distinctions that counted for little with many. They won’t count for much either if such recklessness is repeated.

There have been reassurances that intercounty games are different. It is elite sport and the procedures and protocols put in place for the championships are much more strict than with club games.

But it’s still the reality that it is what happens on the back of any game which is the real public health concern. If some people lost the run of themselves about a club match it is wishful thinking to believe the same can’t happen again on the back of county teams dong well.

Maybe emotions will get checked if, for instance, Mayo finally win Sam after 69 years, although presuming that presumes a lot. Football matters in Mayo. Just like hurling matters in Cork. It’s been 15 years between All-Ireland drinks for the Rebels: ending that is unlikely to provoke a dry response.

There are so many known unknowns jumbled into the running of these championships but the one sure-thing about it all is that it’s going to be a fraught exercise.

When the ex-Tyrone star Sean Cavanagh predicted that players will come under pressure to disguise coronavirus symptoms he was stating the obvious. Players devote their lives to playing. Is it reasonable to ask them to do the right thing if symptoms threaten to scotch their dreams?

Even if players and coaches are paragons of probity, and follow the protocols in terms of reporting and isolating, the consequent potential logistical nightmare involved in fulfilling fixtures is obvious enough to make one question if it’s worth the wick in the first place.

At the very least the potential for self-inflicted reputational injury must be keeping top-line GAA administrators awake at night. Some of them must privately fear it blowing up in their faces.

The GAA is gambling big for morale’s sake. If these championships go pear-shaped it won’t be easily forgiven. It makes for a tense outlook and games loaded with all kinds of meaning beyond who wins or loses. That makes them a cause for all sorts of other polarised opinions to be pinned on to.

It doesn’t help either that any pay-off will be so abstract. Morale is hard to quantify. But it’s worth bearing in mind Eisenhower’s attitude to it. He said the best morale exists when you never hear the word mentioned. “When you hear a lot of talk about it, it’s usually lousy,” he said.

And there’s really been too much talk to encourage optimism.