Will the lack of crowds and accompanying tension lead to open, high-scoring games? 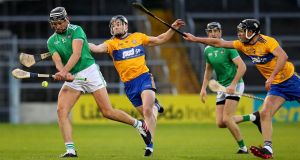 Gearóid Hegarty of Limerick is challenged by Clare’s Tony Kelly at Semple Stadium. Both players turned in exceptional displays for their respective counties. Photograph: Ryan Byrne/Inpho

There were striking similarities between the first two matches of the 2020 championship even if each was played to a different standard.

We saw congested middle thirds of the field, troops of free players ready to take shots from nearly anywhere and what must have been record points’ tallies for Dublin and Limerick.

In Thurles on Sunday Limerick took a while to shake off the rust but their predictable advantages of physicality in the middle, a deeper bench and broader scoring options were decisive in the end.

Clare were massively dependent on Tony Kelly floating around and picking his shots from virtually anywhere in the middle third and it was telling that when the teams changed around, he began to experience a greater level of difficulty, missing three frees at the start of the second half whereas Limerick had three points within 75 seconds, which effectively set the trend from there on.

Doubts about their full-back line were confirmed by the Clare goal. Barry Nash, a novice corner back at this level, committed to an unnecessary contest and Ryan Taylor finished the chance well but otherwise Clare put hardly any pressure on the Limerick full backs, which is unlikely to happen next week when they face Tipperary.

Something else the weekend winners have in common is that the extra game will bring them on a ton. In Thurles, Limerick were improving even by the second half on Sunday. Gearóid Hegarty hit his stride, Kyle Hayes came more into it and so did Will O’Donoghue.

Hegarty in particular took over as the match wore on. He was playing very well in the disrupted league and on this evidence has brought that form with him.

The story of the two days though is the extraordinary scoring. I saw Mattie Kenny referring after the Dublin match to the higher goal rate in Premiership soccer since they started playing with no spectators. We’ll need a few more games before coming to conclusions but I don’t think it’s the full story.

Of major significance is the natural evolution of the game and the emergence of overcrowded middle-third areas and very little designated marking. Sliotar technology – and the yellow ball didn’t seem to make a lot of difference – has improved but the relative ease with which shooting space is found allows precise striking.

So a lot of matches are played out like shooting galleries. Maybe the lack of crowds reduces tension but that has a curious effect on contests we expect to have championship intensity and there is also a possible impact on excitement.

The ease of point scoring is also potentially undermining goal scoring. The weekend’s two winners had between them over 80 shots for points and just five goal attempts, two of which were scored.

It’s a bit early to detect trends but also for what it’s worth, last year’s provincial championships in Munster and Leinster, played in the round-robin format, saw 22 games and only twice were 30 points scored and in both cases it was no more than that, which is a nine per cent occurrence.

Already, after the first two matches in this year’s provincials, it’s running at 100 per cent.

We’ll have a better idea after what will be in terms of quantity the biggest weekend of the hurling championship in a week’s time.

Finally, having been in Croke Park on Saturday night for the start of the championship, I think the huge effort of teams has to be acknowledged. Dublin and Laois aren’t expected to be around for as long as some other counties but the work involved in getting teams ready so that we can have a championship at all falls on them as well.

At the best of times a manager has to juggle work and family as well as managing but now you need to be a health officer into the bargain.

The match itself provided a relatively poor standard even though Dublin put up a good score. I don’t think I’ve ever seen such looseness in a championship match. Whether it was the lack of tension because there was no crowd or the shared tactics of playing a sweeper – again there were banks of players in the middle third marking nobody in particular – is hard to say.

Laois were always going to have difficulties chasing the match and that’s how it worked out.

For Dublin the excellence of Donal Burke’s striking – in play as well as from frees -– was the obvious stand-out influence but they’re a powerful, athletic team and having a game under their belt is going to bring them on significantly.