Dublin come from behind to see off Galway in dead rubber 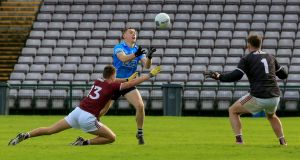 Con O’Callaghan fists a point for Dublin in their win over Galway. Photograph: Bryan Keane/Inpho

Kerry’s win on Saturday meant this one was a dead rubber as far as the league title was concerned but both managers were happy with a decent workout before the attention turns to championship football on Saturday week.

A windy and wet day in Salthill was a reminder that this will be a championship like no other but the ability of the All-Ireland champions to plunder a couple of goals was enough to secure victory at Pearse Stadium.

Galway led by only 0-9 to 0-7 at the break, having played with the strong breeze, but fears of shipping another heavy defeat after the drubbing by Mayo a week earlier never looked like materialising for the Tribesmen, who battled to the end and restored a lot of confidence ahead of their championship opener against Sligo on Saturday week.

“We got a performance out of the lads, which was very pleasing,” said Galway manager Pádraic Joyce. “We did really well bar a couple of mistakes that we made that we’ll try and rectify. But it’s fixable, which is great.

“We gave James Foley and Paul Kelly a debut today and the two of them did really, really well… very happy with the two of them. It’s great to see lads coming through.

“Overall, if you take the league as a whole, we’re still in Division 1 which is a great thing. We came third in the table or whatever, and I think 35 or 36 players got game time. Even last week, lads got games, [it] didn’t go well but they learned a lot. We’re getting ready now for Sligo.”

Galway needed to secure a bigger lead when they had the wind but just couldn’t pull away from a Dublin side who retained possession and were patient in building scoring chances. And they made the most of what they created, not shooting the first of their five wides until the 44th minute.

Paul Conroy led the Galway challenge, shooting 0-8, six of which came in the opening half, including excellent efforts from play.

Dean Rock responded with a brace for Dublin and an effort from Con O’Callaghan meant they were level at 0-3 apiece at the end of the opening quarter.

Paddy Small laid down a championship marker with a superb performance which he crowned with 0-4. Two of them came in the opening half from acute angles on the right and after the break he slotted two marks from the left in the sort of display which Dessie Farrell was looking for.

“That’s the second solid performance from Paddy so we’re very happy with him on the back of a very strong club campaign as well. Now is the time to be putting up the hand. There’s a few fellas hopefully doing that for us,” said Farrell.

Galway, having lost former All Star Ian Burke to a sliding challenge from James McCarthy which angered Joyce, brought on captain Shane Walsh and the experienced Gary Sice and they took the game to the All-Ireland champions in the third quarter.

A trademark point on the run from Walsh helped them pull 0-12 to 0-8 in front after 46 minutes but then Dublin flexed their muscles and hit 1-4 without reply, with sub Sean Bugler getting the goal with a shot to the roof of the net after good work by Robert McDaid and Cormac Costello.

That left them 1-12 to 0-12 in front 11 minutes from the end and after the sides twice exchanged points, another free from Conroy cut the gap to two in injury-time but their hopes of snatching it were dashed when Con O’Callaghan finished low to the net after a fisted effort for a point came back off the woodwork and fell kindly for him.

“It was a pleasing performance. We are happy enough with it but there is plenty to work on for sure. It is just our second competitive game so there is still a bit of ring-rustiness and we’re trying to shake that off in advance of the championship. We were just happy to get the game and the victory with some decent performances,” added Farrell, who confirmed afterwards that goalkeeper Stephen Cluxton will again captain them into the championship.

England need 36 to win as bad light halts play in Sri Lanka 13:04
Bríd Stack hospitalised after injury in AFLW pre-season friendly 11:28
India rearguard frustrates Australia and leaves series in the balance 11:19
Brendan Steele takes the lead at Sony Open with a round of 61 11:10
Man United head to Anfield as top dogs but Liverpool know how to respond 11:03
Crossword Get access to over 6,000 interactive crosswords