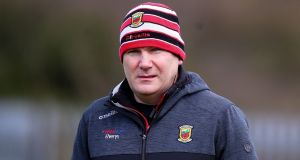 A replay of last year’s successful Allianz Football League final against Kerry will help refocus Mayo minds onto the field of play, after the county board confirmed they had ceased all contact with Tim O’Leary, the financier who founded the Mayo GAA International Supporters Foundation.

The decision came in response to comments made by O’Leary on social media, calling for the departure of county football manager James Horan. After Sunday’s heavy defeat to Monaghan, O’Leary tweeted #Horanout and although he took it down and issued an apology: “Sorry for my outburst yesterday – had a few too many pints – lesson learned – I am going to keep my mouth shut going forward,” Mayo officers clearly lost patience with their controversial benefactor.

“Mayo GAA will not engage with stakeholders whose behaviours deviate from what has been mandated by our clubs and in light of recent social media comments made by Mr O’Leary engagement has now ceased,” they said. “The club delegates of Mayo GAA have mandated agreed behaviours based on mutual respect, the exclusion of animosity and the inappropriate use of communication channels such as social media.

Mayo, on three points, and less so Kerry, on five points, will also be playing to keep alive their division one status, Saturday’s game set for MacHale Park (7.15pm - eir Sport/RTE2).

“What I saw in Croke Park last Saturday evening was the worst I’ve ever seen, and I mean that. Everything that happened, the best way I could describe it was Pat Shortt’s Killinaskully programme because what went on you wouldn’t see it in that show. To think that Wexford had a mentor that was able to bring in a ball every time Lee Chin got a free….the yellow cards, the penalty he gave against Dublin was disgraceful.

“I walked away from management because we had a referee who gave 16 decisions against us the day we drew with Limerick. The first game, the referee blackguarded us. This discussion has come up over and over again – but last weekend was the worst.

“And then when you hear Kieran Kingston speaking on League Sunday last Sunday night, coming out strong enough to say more or less that the referee destroyed the game. They are fooling themselves if they think this is going to continue. Joe Kernan and myself were invited to a committee I’d say 14 years ago – it was an issue then, and it’s a bigger issue today.”

Keating also highlighted Limerick’s one-point defeat to Kilkenny in last year’s All-Ireland semi-final, and the decision not to award Limerick a 65m: “To think the linesman wasn’t 10 yards away from where the line ball was taken, and it basically put Limerick out of the final.

“Obviously Kieran Kingston confirmed that Cork was no better than what we witnessed in Croke Park. Now, I played with fellas who you wouldn’t give a whistle to, nor would they want a whistle. The county secretaries and chairmen would know the calibre of player you’d give a whistle to. In my day most of the referees were former players – there was no yellow card or red card or black card in those days.

“I would love to see players like John Leahy, Eoin Kelly or Nicky English, number one they would have the respect of the players and the crowd in the stand, plus they’d have the common sense that everybody is vulnerable to making a mistake but they’d have the sense to balance the books. There’s more action in a camogie game than there is in hurling.”

1 ‘Magnificent’ Conor Connelly remembered after sudden death
2 Nicholas Quinn: ‘Swimming became how I dealt with grief’
3 Iggy Clarke cherishes the friendships he made while playing for Galway
4 A beautiful, happy accident - Moneyball is the best sports movie ever
5 James McClean still failing to learn his own online history lesson
Real news has value SUBSCRIBE