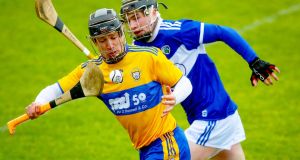 Dublin v Wexford, Croke Park, 5.0 - Live Eir Sport
Dublin completed the must-win fixtures last week with a decent second half against Carlow, featuring some well-taken points on a foul night but also a perplexing inability to make goal chances count, which will attract a costlier tariff in matches against the better teams, such as this one.

It will be a kind of an event in itself as the Dubs haven’t hurled competitively at HQ for two years and those experiences encompassed two best-forgotten defeats by Offaly and Tipperary.

This won’t be easy either with Wexford now fairly familiar with the venue and buoyant after their wind-defying heroics a week ago. David Fitzgerald’s team is back at near full strength with the return of Lee Chin and Matthew O’Hanlon and moving well, which makes them deserved favourites. Verdict: Wexford

Laois v Carlow, MW Hire O’Moore Park, 7.0
This was always going to be the golden ticket from the moment the leagues were so curiously redrawn. The prize for winning is essentially another season in the top flight.

Laois have been looking the more likely and more competitive outfit so far, their deficits running at around half of Carlow’s despite Eddie Brennan continuing to have availability issues. In fairness to Colm Bonnar’s team, they have also been understrength with injuries and absence in general costing them about half of last year’s championship team. Verdict: Laois

SUNDAY
[Matches at 2.0 unless stated]

Waterford’s best days since reaching the 2017 All-Ireland have been against their conquerors that day. Last year, which ended in calamity, still featured two good wins over Galway, including a comeback success in the league semi-final.

This season has been going well under Liam Cahill’s new management with new players freshening things up and a sense of purpose. There is an injury doubt over the much put-upon (in that respect) Darragh Fives but after two matches and one postponement, the mood is upbeat.

Harder to figure out in Galway, as Shane O’Neill looks to reintegrate some established players but they were disappointingly inert against Limerick. Improvement can be expected but the home side can sneak it. Verdict: Waterford

This was the Cassandra fixture last year. Limerick at full tilt in the 2019 league and en route to winning it, inexplicably lost to an apparently ailing Cork at home. Treated as an outlier, it prompted some revision when they repeated the dose later on, in the summer.

All told, it means that in Limerick’s time of plenty in the past two years they haven’t managed to beat Cork over 70 minutes in four matches. The holders are looking lively at the moment, however with two wins from two and in as much as form counts, Cork – despite beating Tipp – are too inconsistent. Verdict: Limerick

Tipperary v Westmeath, Nenagh
It’s been another of those underwhelming post-All-Ireland leagues for Tipp but labouring in the spring didn’t concern them last year so Liam Sheedy’s probably not rethinking that approach, especially as the new league more or less guarantees against relegation.

This match is the guarantee and Westmeath arrive after giving last week’s visit of Cork a good lash before coming up just short. Tipp have also been giving run-outs to some of the rising under-20s from the past two years and can shrug off the burden of their 100 to 1 on price tag. Verdict: Tipperary

Kilkenny v Clare, UPMC Nowlan Park
Brian Cody has unsurprisingly granted extensive leave to the established All-Ireland winning club hurlers, given how round-the-clock the demands on the likes of TJ Reid, Adrian Mullen et al have been – Mullen’s brother Darren is however in the audition business and duly lined out.

The Kilkenny manager is unlikely to have been too cut up by the defeat in Wexford last week, despite the irritation of it all, as his team were clearly farther off their optimal selves than the Leinster champions.

This will also be tricky, as Clare have been showing good form under Brian Lohan’s new management with a number of redeployments going well and players like David Reidy looking re-energised. Kilkenny have over the years proved surprisingly adept at coping when understrength but the visitors have momentum. Verdict: Clare