Kieran Donaghy calls for GAA to shut down fans’ forums 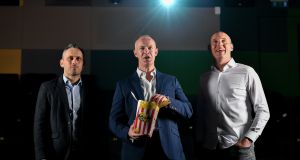 Alan Brogan, David Brady and Kieran Donaghay at the launch of a new series of Laochra Gael which returns to TG4 this spring for an 18th series. Photo by Brendan Moran/Sportsfile *** NO REPRODUCTION FEE ***

A year on from highlighting the impact of online abuse on sports people, and six months since the Gaelic Players Association took on the same baton, claiming it’s “filtering into our game”, Kieran Donaghy hasn’t seen much improvement.

As it happens, it never bothered him much as a player though, as the father of two young girls, he’s “‘fearful” now about where sport and indeed society is headed.

“People have a genuine opinion, they put it up and there’s a bite back in the comments then, there’s not just a disagreement, there’s bite behind it constantly,” said Donaghy, going on to reference the death by suicide of television presenter Caroline Flack who had urged people to simply ‘be nice to people’.

“There’s an old saying, ‘If you don’t have anything good to say, don’t say anything at all’, and if more people took on that policy I’d say it would be no harm. It is tragic what happened Caroline Flack. That’s a very highlighted incident but it’s happening all over the world right now, kids taking their own lives because of what is going on.”

GPA chief executive Paul Flynn said in September that he was aware of intercounty players who “‘couldn’t go to work the next day because of the abuse they got on a Sunday [following a game]”.

Flynn described it as an “epidemic” and while Donaghy said those delivering that abuse “need to cop on”, the former Footballer of the Year said it’s incumbent on the GAA now to try to take some control of the situation.

“These forums that every county has, if the GAA was to do one thing, I’d shut down every one of those forums,” said Donaghy. “They’re such a negative force. A lot of poison inside in them, people giving out. There’s literally no need for them because 90 per cent of the people don’t have a clue what they’re talking about inside in these forums anyway.

“It gives them a massive voice and they’re able to talk about people, talk about people’s jobs and that they should have done this or that, get personal with people. It’s the one thing the GAA would be doing well to do, shut down all those forums. I’d shut them down.”

Donaghy acknowledged that many counties have their own fans forums, created with the intention of delivering support for their teams.

“I think that’s what it probably is at heart but it turns into this kind of...like, I always say this about a team, if you’re in a team and you’ve got a load of positive fellas around, there’s a buzz, there’s a positive atmosphere and one or two negative fellas might start to pull it down but the more positive fellas will say, ‘Hey, cut it out’ but if you’re in a room with 20 negative people, it rumbles on and it’s all ‘He should have done this, he should have done that’ and it’s ‘Yeah, you’re right’ and they feed each other and they’re off, uncontrollable, banging away and typing on their keyboards at home,” said Donaghy.

“They are fans forums but I would urge the GAA to look at it and cut them out because I don’t know what good comes out of them. Show me any good that comes out of them and show me that I’m wrong. There’s enough social media out there now to know when games are off or on. These forums, I think all they’re for is just negativity.”

Donaghy revealed in early 2019 during a discussion on the issue that former All-Ireland-winning Cork camogie captain Anna Geary was the subject of online criticism and “vile stuff” while taking part in RTÉ’s Dancing with the Stars.

“They’re absolute fools,” he assured her at the time. Donaghy, a four-time All-Ireland winner and top basketball player, said he was strong enough throughout his Kerry career to largely ignore such abuse though he’s aware that others let it get to them.

“My basketball camp is on again this Easter and I do two 15-minute talks with both groups the first day about online bullying, social media and how to handle it and just not to be a part of it because I think they might take it a bit better from me,” he said.

“It’s something I was always able to handle very easily. I don’t know why, maybe it’s through the sport, maybe it’s the adversity I faced on the pitch which allowed me to handle it better but I’m fearful now, I’ve two young girls. You should have to get some kind of online passport, that people can’t be just sitting out there, a random name up online and hurling abuse at people. It’s tough for young forwards, young players coming through, every move they make is scrutinised that bit more.”

Donaghy was speaking at the launch of TG4’s new Laochra Gael series with the opening programme on March 5th set to chronicle the Tralee man’s career.