Ireland are hung, drawn and third-quartered in Adelaide 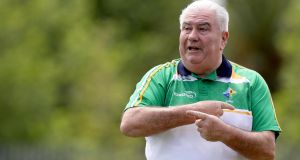 Easier said than done. Joe Kernan said that yes, indeed, there had been a focus in preparations on the third quarter and how influential it can be. But no matter how free and frank such exchanges are, talk can achieve only so much.

On Sunday in Adelaide Ireland lost the quarter 22-8.

“Yeah, we did, but sometimes you can talk about it and it doesn’t happen. I think it was more a lack of composure; we stopped doing the simple things. In the fourth quarter, we did the simple things again. We found the space, we hit the good passes and we took the chances.

“There were a lot of times in the third quarter when we got the mark inside the Australian 50 and we didn’t take it and take the shot. That was on four occasions we played on and lost the ball. As far as I’d be concerned, it was a minimum three overs, which is nine points, and all those overs are vital.”

Even at the end Shane Walsh performed one of those balletic turns of which he is capable to ghost inside the Australia defence, but his shot went wide of the goalpost for a behind – the one-point pity score that is awarded for shots that don’t go terribly wide.

Australia played well. They crowded us in a lot of places and they used the ball well today

“I’ve seen him put those in the top corner since he came on to the panel, and that would have been a nice way to finish it off and leave it down to four points.”

Instead Kernan’s team face a sheer ascent in the second test, trying to pull back a 10-point lead.

Fortune hasn’t smiled on the team. Illness in camp removed two players, and a third, Pearce Hanley, won’t play any role next week after sustaining a hand injury. The 30-degree heat didn’t help, but Kernan wasn’t making an excuse of it when asked had the home team benefited from it.

“They probably did, but it could have been worse. The bit of a cloud, the bit of a breeze were actually a help. I thought it was going to be worse. That’s not the reason we lost. Australia played well. They crowded us in a lot of places and they used the ball well today. Their marks inside were very, very good and that’s something we have to look at the next day.”

A feature of Australia’s play was the commitment to attack and gambling on defenders pushing up when in possession, according to their coach Chris Scott.

“We did want to score. We wanted to play an attacking brand of football. We had no intention of sitting back and defending our back half, which was one way to go given that the Irish kick the ball so well.

“We thought we had an obligation to play an offensive style of game, which means you need to play a defence that complements it. We did take a few risks there, maybe a few too many early in the game that gave the Irish some chances. I thought those two parts of the game, as it went on, complemented each other fairly well.”

So you’ll do it again next week?

“It’s certainly a debate we’ll have as a coaching group given we have the 10-point lead, and all that really matters in terms of the series is the aggregate. If we get too aggressive with our defence coming up and they get a couple of unders, our lead is gone. I think we might need to be a little bit more conservative there.”

Part of the risk-taking was underwritten by new goalkeeper Brendon Goddard, who played essentially as fly-keeper, racing out to sweep behind his defence and to re-adjust the odds slightly.

The Ireland manager was asked would he consider deploying Niall Morgan like that.

“Not really, because the men they have inside need to be marked and, in fairness, Australia knew if they kept the big boys in there they were going to cause us problems. We have to work on making sure the good ball doesn’t go in.

To a man, every player has loved the experience. There would be a little bit of surprise among those that haven’t been part of it as to how passionate our guys are

“Niall was unlucky with the first goal, I thought he had it covered but it was a great shot into the far side. You have to give credit to the shooter and don’t blame the goalkeeper.”

On a more downbeat note, Scott was asked about whether injury – both Hanley and Australia’s Scott Pendlebury sustained fractures – might pose a problem for AFL clubs and their continuing support for the series.

“Yeah, it does. It’s clearly something that’s on our minds, and I’m sure it’s on the minds of the Irish as well. If we want this series to work, we have to continue to push to get the best players out there.

“To a man – and this is my third series now – every player has loved the experience. There would be a little bit of surprise among those that haven’t been part of it as to how passionate our guys are. As far as I can tell the series has the support of the clubs, and while it has the support of the clubs and players, I think it has a really bright future. I suspect next week in Perth we’ll get a sell-out.”

Monaghan’s Conor McManus is the vice-captain and about as disappointed as anyone who’s just top-scored for the fourth successive test could be. He felt that he and his forwards had made things easy for Brendon Goddard.

“He did [play well] but he’s not really playing as a goalkeeper. We had one shot on goal and he didn’t get within an ass’s roar of it. If we can get chances, if we get more shots on goal, he’s not going to save them.

“He’s very quick out and he’s very quick to cover that space as a sweeper but I certainly think if we can get one-on-one with him we can punish him. We left a lot of scores out there.”