Derry champions have six points to spare on Donegal side Kilcar 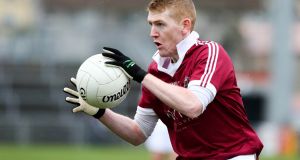 Slaughtneil are into their third Ulster Club SFC Final in four years after an impressive six-point win over a very wasteful Kilcar side in Healy Park, Omagh on Saturday night.

The Derry champions raced into a 0-6 to 0-1 lead after 16 minutes, with three points from Christopher ‘Sammy’ Bradley with Paddy McBrearty opening the account for the Donegal side.

Kilcar dug their heels in to lead by the narrowest of margins 0-8 to 0-7 at the break, Paddy McBrearty leading the charge kicking five first-half points.

Slaughtneil’s incredible run looked in real danger at the break but like true champions they took charge to lead 1-13 to 0-10 after 41 minutes when Sé McGuigan rifled into the roof of the net.

Bradley continued his fine scoring performance, while further scores from McBrearty and McHugh kept their side in touch. With only three minutes left to play a lightning counter-attack saw Shane McGuigan square the ball to the awaiting ‘Sammy’ Bradley who punched into the net.