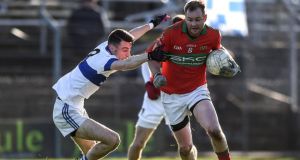 It’s not a million miles from Marino to Aughrim, but it’s another world nonetheless, as Dublin and reigning Leinster club football champions St Vincent’s have just discovered.

Wicklow champions Rathnew, the rank outsiders, have ended their hopes of winning back another provincial title, thanks mainly to a brilliantly finished goal in the last five minutes by midfielder James Stafford.

It was a deserving win all round, the Wicklow champions going man on man with St Vincent’s: they were a point up at half time, and went three clear not long into the second half.

Club veteran Mossy Quinn looked to have given St Vincent’s the advantage with his goal on 45 minutes, but that turned out to be their last score of the game, as Wicklow dominated the last quarter.

There was nothing St Vincent’s captain Diarmuid Connolly could do to save the Dublin champions, who had won third Dublin title in the last four years.