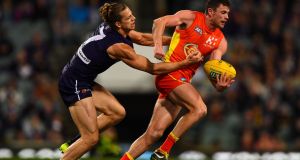 Mayo man Pearce Hanley (right) in action for the Gold Coast. The player believes the 2017 Ireland v Australia series will be an even contest. Photograph: Daniel Carson/AFL Media/Getty Images

It’s been a difficult year for Pearce Hanley. Sidelined with injury for a spell this season, he was also allowed compassionate leave by his club Gold Coast to extend his Christmas break back home in Mayo in order to spend time with his terminally ill foster brother Tommy, who died last March.

Hanley and his brother Cian, on the books of the Brisbane Lions, returned to Australia afterwards to resume their careers. Already capped during the 2011 and ‘14 series, he was called up into Joe Kernan’s Ireland panel.

“Obviously, it’s been an indifferent year,” he says. “I had to come home for awhile earlier in the year for a couple of weeks and then when I came back I got injured. Performance-wise, I still played some strong games and some strong footie towards the end of the year that I will look to build on next year. I’ve enjoyed my first year with the Gold Coast so I’m happy with the move.”

There are the inevitable questions about his move from Brisbane to Gold Coast and the benefits.

“Well, that’s it. I thought Brisbane was nice but the Gold Coast is gone to another level. I’ve a nice house on the beach and the weather’s 30-35 degrees every day so it’s hard to leave.”

Whatever travails he suffers in his career as a professional footballer, he also has to come to terms with the disappointment of watching his Co Mayo from afar, as they endure an apparently endless sequence of narrow defeats in All-Ireland finals.

“I did watch it,” he says about this year’s final. “I love watching them but obviously it’s hard to watch because we always come so close and just can’t get over that final hurdle. There are always a lot of what ifs when I’m watching and I’m sure there are for Mayo supporters as well but I guess that’s just happened.

“I’ve come out here. The boys back it up every year and I couldn’t be prouder. Hopefully now next year they can go one step further.”

Throughout Mayo’s travails he is aware that speculation rears up from time to time linking him with the possibility that he might emulate Tadhg Kennelly, who interrupted his AFL career in 2009 to return home to Kerry to give the county a season and as things worked out he won an All-Ireland medal and an All Star.

It’s not the most comfortable contemplation for Hanley – that he might be the difference between Mayo winning and losing All-Irelands.

“It might have been but then it might not have as well. They’ve a lot of good, young footballers coming up through the system so hopefully they can add one or two to the team they have already who can step up and play a bit of football and they might win an All-Ireland.”

This year his brother Cian, whose Australian adventure has been wrecked by persistent injury, found himself delisted from the Brisbane AFL squad. He is, however, sufficiently encouraged to stay around Australia and hope for the best.

“Ciano,” says brother Pearce, “the first two years he was riddled with injuries but he played last year so after missing two years of football he didn’t set the world on fire but it’s a good base and I think this year he’s going to have a breakout year. I think everyone is excited about that.”

As one of just two AFL players at Kernan’s disposal, Hanley knows that his input into challenging his colleagues and friends may well be significant. He is also aware that some of the Australian voices have questioned Ireland’s ability to plan properly for – let alone counter – the physical intensity Chris Scott’s team will bring.

“Obviously, they are going to have some disadvantages. The boys over here pretty much have the whole week to do it so there might be a tiny advantage but I can’t see it being too big of an issue. They’ve obviously a few big strong boys but nothing our lads can’t handle. Then the rest it’s pretty even.

“They’ve always said they’re looking to throw their weight around so I can only imagine what sort of game they want to play. I can imagine they will want to make high tackling, high pressure and just use their physicality. I guess time will tell.”

Finally, there was a high-profile withdrawal from the Australia panel for the series when Pearce Hanley’s former Gold Coast team-mate Gary Ablett announced that he would be pulling out for personal reasons.

Since Ablett, who has been traded back to his old club Geelong, was selected for the international panel his sister Natasha has died. Australia won’t be calling up any additional names.