Aidan O’Shea: ‘I’m not really concerned if they want to bring it physically’ 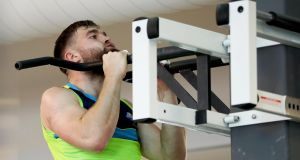 It hasn’t been the most straightforward of trips for the Ireland captain Aidan O’Shea, leading an unusually inexperienced team and having to cope with the anxieties of illness in the camp. But at least the preliminaries are now over and the football is about to take centre stage.

The two teams met on Friday night for what was by all accounts a convivial evening. There, O’Shea couldn’t help noticing that for all the talk on the subject the home players weren’t that much more imposing than their counterparts.

“We were at dinner with them and there’s no real significant difference between both sides from a physical conditioning point of view. They’re professional athletes but we match up pretty well.

“We’ve got some big boys around the middle and some good runners, good speed, and we’ve got some great scorers. I’m not really concerned if they want to bring it physically - we have the ability to handle that.”

He’s an experienced international with three series under his belt and his game at this level has developed to the point where he was in the view of Australian coach Alastair Clarkson, the outstanding Irish player two years ago when he scored two goals.

Having observed team-mate Michael Murphy, his predecessor as captain, discharging the leadership duties helped him get to the grips with the responsibilities involved.

“Obviously, I’ve been on the last couple of series including when Murph (Michael Murphy) was captain and I would have seen his duties and that. The captaincy is a lot of more media-friendly in trying to promote the competition and it’s been fine.

“A little bit stop-start from Melbourne to here but I think there is an anticipation to get it going especially with a two-test series to get over the first one and see how it goes and build into the second one where we’re obviously expecting a big crowd.”

It’s expected to be hot in the Adelaide Oval. The Ireland captain says they won’t be using it as an excuse or letting it bother them unduly. Instead he’s focused on taking a grip early in proceedings - which Ireland managed to do in Croke Park last time out but conspicuously failed to do in Perth three years ago.

“If you look back to two years ago in Dublin they play a really high press game. They’ll push (Brendon) Goddard out from goal and use him as an extra defender and try and press our kick-outs really high and try and spring their attacks from there.

“It would be ideal for us to try and win the ball and put pressure on their defence early so they can’t cover back in numbers. We got success in that two years ago and I expect that’s how they’ll approach it again and it’s up to us to try and get the ball out of the busy areas and try and punish them high up the field.”

He’s happy with the reversion to a two-test format.

“The fact that you have them two games maybe gives you the chance to learn the game in a proper environment, not in a trial game situation against a highly competitive game. The two-test series should really show who comes out on top.”