The hosts have 10 points to spare ahead of next week’s second Test, a sellout in Perth 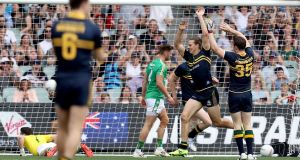 That Russian roulette feeling you get before first tests with no real clues as to which barrel is going to be loaded gave way to a stark realisation that it wasn’t going to be Ireland’s day.

The illness that had disrupted preparations took a toll with both Enda Smith and Niall Murphy ruled out before the start whereas Australia also lost a listed player, Joel Selwood. By the end, Ireland had also lost Mayo’s Pearce Hanley, one of their two AFL players, to a suspected broken bone in his hand.

As ordained by cliché the third quarter was when the damage was done, as Australia went from the slenderest of half-time leads, 28-27 to a commanding 15-point advantage by the three-quarters mark.

Although Ireland edged the final quarter Australia were overall by far the stronger team in Sunday’s first contest in this year’s international rules series in Adelaide. Ireland never hit top gear and although there were high-scoring contributions from established forwards Michael Murphy and Conor McManus there was also a litany of wasted chances in a disappointing display by the visitors.

By contrast the Australians picked their way through difficult periods in the match - especially the second quarter - steadied and showed more consistency in all facets of the game.

Even the newly unveiled goalkeeper Brendon Goddard had an excellent day between the posts, saving a couple of goal chances and doubling up effectively as a sweeper when his sometimes short-crewed defence left gaps.

Fremantle’s Nat Fyfe gave a great display of scoring, hitting a gem of a goal in the 44th minute, curling it beyond Niall Morgan after good build-up by the constantly threatening Eddie Betts and team captain Shaun Burgoyne. To that six-pointer he added a few overs and a couple of spectacular marks to underline the loss he was three years ago when forced to withdraw because of injury.

Ireland were tentative, standing off their opponents who managed to make inroads quite easily. It could have been more but the woodwork came to Ireland’s rescue on a couple of occasions.

Hardly surprisingly given the game’s intermittent nature, both teams took a while to find their feet. Ireland took the early initiative with McManus showing again why he’s such a threat in these games with two well taken overs but as the match developed it was clear that the AFL team also had impressive performers.

Chad Wingard took an astonishing one-handed mark, which drew gasps from the crowd of 25,502 - even though it wasn’t converted.

The recent pattern of a high Australia defence was maintained but although goal chances were conceded Ireland’s conversion rate was poor and they ended up being out scored in the six-pointer category. McManus will be disappointed he didn’t make more of a couple of chances when he tried to chip the goalkeeper and an earlier incident when Goddard just tackled him when one-on-one.

Ireland got off to the best possible start in the second quarter. An intricate move set up by a clever ball from Shane Walsh was continued by Paul Geaney and Pearse Hanley before Michael Murphy came in on the end to crash in the first goal of the series. On a couple of occasions the visitors led by 10 but the lead seemed to have an atrophying effect on Ireland and gradually the Australians worked their way back into it and actually led by a point at half-time.

Goals remained elusive and Paul Geaney was blocked by Goddard in the 49th minute, as the match moved beyond them after Fyfe’s goal.

There was a fourth-quarter flourish to get the deficit down to seven but any hopes that the margin could be kept manageable for Perth next Saturday perished when Luke Shuey managed to flick a loose ball past Morgan in the 64th minute after the Irish defence had been caught out by the bounce.

At least Joe Kernan’s side will have a second test in six days time in Perth but it will require a barely credible turnaround in fortunes to rein in the home team’s 10-point lead; no team has covered a gap of more than eight points in a second test.