Adare find Nemo out of their range in Munster 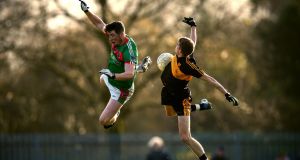 Despite a black card and losing their goalkeeper to injury in the first half, reigning All-Ireland club champions Dr Crokes had 15 points to spare over Clare’s Kilmurry/Ibrickane in qualifying for their sixth Munster club football decider this decade.

Indeed the Killarney side could have found the net a further four times in the first half in addition to the extremely impressive Johnny Buckley scoring a goal in the 14th minute as Kieran O’Leary put him through.

The Clare side nearly raised a green flag themselves through captain Martin McMahon before the break yet the visitors never troubled their opponents sufficiently on the day.

Ambrose O’Donovan was black carded for a trip on midfielder Enda Coughlan in the 16th minute but of more concern for Crokes came 10 minutes later when their goalie Shane Murphy had to go off with a head injury. His replacement Johnny O’Leary coped well however, as Crokes led by 1-11 to 0-4 at half-time.

Kilmurry/Ibrickane did try to up it early in the second period both on the scoreboard and physically but Crokes were not perturbed despite a bizarre concession of a ‘45’ by Fionn Fitzgerald which Keelan Sexton subsequently converted.

Mark McCarthy tried his best to offer the visitors an outlet but the game was pretty much over as a contest in the 44th minute when both Buckley and O’Leary swapped roles from Crokes’ first goal. Kilmurry/Ibrickane goalkeeper McInerney should have done better with the high ball Buckley sent in as O’Leary pounced to make it 2-15 to 0-8 near the three-quarter mark.

Colm Cooper had a steady rather than spectacular display for the victors in scoring 0-9, with six coming from frees, as every starting forward for the Crokes and 10 players in total made it on the scoresheet.

Gavin White and Micheál Burns had good displays although the latter would have been disappointed not to add on a goal late on as Mark Killeen also had to defend well before the final whistle for Kilmurry/Ibrickane in preventing another goal chance.

Crokes’ 15-point win sees them bid for a fifth Munster title this decade in two weeks’ time against Cork’s Nemo Rangers, the last side to beat them in a decider back in 2010. With Kerry natives Tomás Ó Sé and Adrian Greaney among the Nemo ranks it should add a bit of spice to the occasion on Sunday week.

Nemo Rangers easily qualified for their 18th Munster club football final after a comfortable win over debutants Adare in a one-sided semi-final in Mallow on Sunday.

The 15-times champions had too much class and experience for their well-beaten opponents and Nemo had their place in the final secured when leading by 2-6 to 0-2 at the interval, having played against the wind.

They settled quickly and were into stride from the start with Paul Kerrigan outpacing the defence to kick the opening two points before Nemo pounced for their first goal after 10 minutes.

Adare lost possession cheaply in their half-back line and Nemo took full advantage as Alan O’Donovan played in Luke Connolly, who made no mistake from close range.

Mark Connolly grabbed the Limerick champions’ first score after 14 minutes only for Kerrigan and a Connolly free to make to it 1-5 to 0-1 by the 20th minute.

Paddy Gumley picked out Barry O’Driscoll with a super pass which the Cork player caught one-handed before slipping home to an unguarded net.

The pattern continued on the resumption with Nemo able to withdraw Luke Connolly as early as the 35th minute as they began emptying their bench.

Three points on the spin at the start of the second half extended Nemo’s advantage and they were 2-11 to 0-3 clear entering the closing quarter as Adare could only muster one point from play.

Nemo finished in style by scoring the last six points with Kerrigan, fittingly, closing out the scoring from distance.