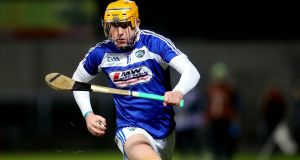 The good times continue for Laois hurling as Rathdowney-Errill recorded their first ever Leinster club championship win thanks to an impressive triumph over Offaly champions St Rynagh’s in O’Moore Park.

The scoreline in the end may have been harsh on the Banagher club but they collapsed after the sending off of wing-back Paul Quirke, as Rathdowney-Errill finished with a flourish to eventually have 18 points to spare at the final whistle.

Mark Kavanagh was in top form in the opening half as he hit seven points from placed balls - including two delightfully struck sideline cuts from either side of the field.

Aidan Treacy kept St Rynagh’s in touch but with Joe Fitzpatrick and Paddy Purcell also pointing for Rathdowney-Errill, they led 0-9 to 0-6 at the break.

St Ryanagh’s upped their game early in the second half but failed to take their chances and Rathdowney-Errill settled after points from James Ryan and Shane Dollard.

Quirke got his marching orders midway through the half for a strike on Paddy McCane and Rathdowney-Errill powered on from there with Ross King hitting two goals, James Ryan one and a Mark Kavanagh penalty bringing his tally to 1-10.

Champions Cup: Leinster will meet Saracens on Saturday evening 13:18
Bill Beaumont seeks re-election as World Rugby chairman 12:07
Sam Bennett finishes second Down Under after route mistake 12:03
Ole Gunnar Solskjær insists he is up to the challenge at United 11:40
Rugby under threat; Niall Quinn steps into FAI breach 07:33
Crossword Get access to over 6,000 interactive crosswords