Brian Lohan to take charge of the Clare hurlers 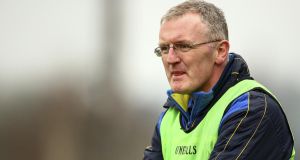 Brian Lohan will take over as manager of the Clare hurlers. Photograph: Ken Sutton/Inpho

Clare GAA has confirmed that Brian Lohan is to be the new Clare hurling manager for a two-year term with the option of a third. He has named Ken Ralph and James Moran as selectors. Further details of his backroom team will be confirmed in due course.

He becomes the latest of the 1990s All-Ireland winning teams to take up the challenge. Ralph and Moran were his selectors when he managed UL, winning the Fitzgibbon Cup in 2015.

Ralph hurled minor for Tipperary but moved to Shannon and played with Clarecastle, winning a Munster club title in 1997, and also with the Clare seniors. James Moran is the oldest of the well-known Ahane hurling family and played for Limerick, winning a league medal in 1997.

Lohan was a major presence in Ger Loughnane’s team in the 1990s and later captained Clare. An All-Ireland winner in 1995 and ’97, he was a four-time All Star at full back in which position he was also named in the GAA’s Team of the 1990s. He won the Gaelic Writers Association Hurler of the Year award in 1995.

Ulster huff and puff their way past Bath and into the quarter-finals 18:09
Haaland hits the ground running with hat-trick on debut 17:44
Defi Du Seuil confirms the form with Un De Sceaux at Ascot 17:28
Man City slip up at home to Cyrstal Palace 17:29
Shane Long ends drought but Southampton lose out 17:18
Crossword Get access to over 6,000 interactive crosswords