Close season or not, there’s no slowing down for Jack McCaffrey

Dublin’s flying doctor gets a few things off his chest, starting with football rule changes 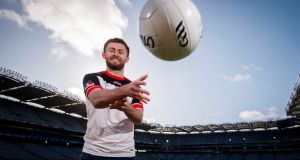 Dublin footballer Jack McCaffrey at the launch of the Asian Gaelic Games, sponsored this year by CurrencyFair. Photograph: Oisin Keniry/Inpho

Forsaking none of his swiftness in the close season, Jack McCaffrey has just put in a long shift in his job as a doctor in Temple Street and is now in a bit of a hurry, having helped to launch the 24th GAA Asian Gaelic Games, sponsored this year by financial services company CurrencyFair.

A few weeks after the five-in-a-row, he says the implications have yet to sink in after another brilliant summer for himself – his turbo charges from wing back having been crowned by a goal in the drawn All-Ireland final, short odds for a fourth All Star and a third nomination for Footballer of the Year.

Rushed or not, he gives enough time to media to take a range of questions with which he engages fluently – a practised flow, he hints, as some of these issues have been before him previously.

There is new material just days after the GAA special congress passed three new football rules, not all of which meet his approval. Top of that list is the attacking mark, enabling a defender making a clean catch from a 20-metre kicked pass inside the opposition 45 to take an unopposed shot at goal.

“I think the attacking mark is awful and I think that’s probably a bit selfish, personally, from me in that it’ll make my job significantly more difficult as a defender – but I do think it’s a little step towards a much more stop-start game.”

It’s not so much the well-aired concern that having to gauge 20 metres while doing 40 other things is an undue pressure on referees, but more the aesthetic impact.

“Referees are by and large good, it’s certainly not an issue with officiating. I think it’s just the stop-start nature of it. I remember when Ciarán Kilkenny signed for an Aussie Rules club, I’d only ever watched highlights.

“I actually sat down in the library in UCD and watched the Grand Final from the year before in its entirety and was blown away with how slow it was and stop-start and scrappy. Obviously, we’re not at that point at all but it does seem a little step in that direction.”

He also deals with the equity issue, Dublin’s material advantages, and is asked if it gets a bit wearing when you’ve made GAA history to be brought back to this persistent question, but he demurs.

“I am more than happy to discuss anything once it is put reasonably. It’s when – and you see it online a bit more – people are aggressive and nasty and don’t really have much substance to their arguments and certainly don’t come in with an open mind, that’s when you just have to dismiss it.

“I do think that the biggest advantage we have is that we are based in Dublin and everyone who plays for us is based in Dublin. We still have lads who make big time commitments and sacrifices, but we don’t have to do that 3½-hour spin up to Donegal for training.

“In terms of equity, I think the big one that everyone talks about is funding and I think . . . well, I don’t think; it’s a fact that Dublin got a lot of funding over the last decade or so which I think to be honest was a completely appropriate thing to do.

“In Dublin there is fierce competition from a lot of sports and, again, too much of GAA is looked at through the prism of inter-county football. It’s obviously a massive part of my life and something I take very seriously, but if that money is keeping kids playing Gaelic games in Dublin then I am all for it.”

One of his most consistent causes is the plight of the club player in the county and he feels the balance is “wrong” and doesn’t believe county players should be just guaranteed championship matches.

“I think what’s often said about county players is that they’re always available for championship for their clubs but that overlooks the reality – in Dublin, anyway – that you’re never going to win a championship without having a team that’s solidly competing in Division One.

“It’s been no use to me and of limited use to Clontarf that I play every championship game when I’m available to play practically no league games.

“At the same time, the clubs have a responsibility as well. There are a lot of situations where clubs just shoot themselves in the foot, and when there are opportunities to vote for certain proposals or reforms, they just don’t do it, and then complain when players aren’t available.”

He has no reason to believe that manager Jim Gavin won’t still be around next year and, although he talks theoretically about Bernard Brogan ending his career, he hopes that he’ll stay on.

Minutes after McCaffrey leaves, the big news breaks. Yet again, too fast.